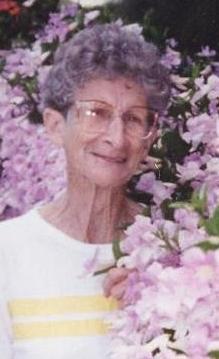 Freida Allene Ambler was born Octorber 7th 1919 to Frederick and Grace Messersmith in Davenport, Oklahoma. She had an older sister, Edith who helped welcome her into the world. Around the age of 2 or 3 the family moved to Tillamook, Oregon where her younger brother Phillip was born. While Freida was young she was quite the entertainer. Her and her sistr Edith entertained friends and family in the community. Edith played the piano, and Freida danced! As a young girl, Freida loved gymnastics and swimming as well. She and Phil managed to get in to mischief together, jumping off rooftops and such! When Freida was a teenager the family moved to Encinitas. There she and her brother helped their father in his restaurant. Freida was a waitress and served hamburgers and malts to all the locals. It was in Encinitas that she met her husband Frank. He was a handsome suitor, and they were married June 18th 1939. Their daughter Joy Ann was born May 9th 1940. Freida and Frank could not have picked a better name, as their girl brought them both so much JOY and happiness. Freida was the most devoted mother many of us will ever know. She loved, guided, cared for and protected her daughter all the days of her life. Freida and Frank moved here to the Los Angeles Area where she worked as a waitress at the Flight Deck with her brother's wife, Norma. A friendship grew and many a happy day was shared between the two. Freida went on to open her own business in Culver City doing dog grooming. She named her shop "The Plush Poodle" and catered to the rich and famous Hollywood crowd. She supported her family with this business while Frank was sick after his heart attack. In late 1959 Freida and her husband Frank went into an auto parts business with her brother Phil and his wife Norma. They named the business A&M Auto Parts. Their business was successful and they had 6 stores they ran at a profit which gave them all a very nice lifestyle and security for the future. Freida was a dedicated daughter, sister, aunt and friend. She cared for and looked after many family members and was a stellar example of family loyalty. She was a good friend to many, and brought smiles to people throughout the community with her gifts of plants, flowers, and general goodwill. Freida with her zippy, quirky, spunky and yes....somethimes ornery attitude will be greatly missed by all who knew and loved her. She will always remain in our hearts. May she rest in peace.