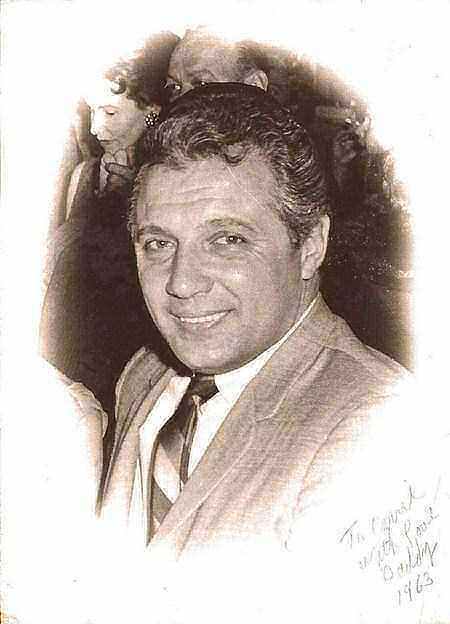 Fred James Maddalone July 25, 1922-December 28, 2012 Born, Frederick James Maddalone on July 25, 1922 in Chicago, Illinois. The son of, Gaetano (George) Maddalone and Caroline Pretzioso (Pretzie). He had two brothers, George Maddalone and Roy Maddalone, 2 sisters, Marie Maddalone Lentini, Nancy Maddalone Caliendo and 2 step-sisters, Toni Maddalone Precht and Joanne Maddalone McMillan. Life in Chicago during this time and especially in the Maddalone household was rich in Italian tradition, culture, family values and fun. He would always hold dear his memories of his Mother, Father and his family's experiences, customs, parties and celebrations. Their home was always filled with music, Fred, like his Father, would love to sing… It was there, ingrained in his youth, he learned the many life giving lessons he loved to share and pass on to his children, grandchildren and great-grandchildren. But, alas, Fred, who his family would say, often lived to the beat of a different drum, longed for more, something different and new so when he was a teen, he ran off to California. Though his escapades did not last long, he fell in love with the West Coast and it would be his constant dream to go back. It was his honor to serve our nation from 1943 to 1946 in the United State Navy. He was proud of his time and he often shared his insights about WWII, our Nation's history, its politics, lives lost and living in the depression. While working as a singing bartender at the Panther Club in Chicago in 1945, he met his future wife, Elizabeth (Betty) Herres. They started a family having Son #1, Jeffrey James, daughter, Carol Lynn (Carrie) and Son #2, Dean Loren. In the beginning, they lived with his parents, but with hard work, they were able to finally have their own home. In 1955, he finally fulfilled his desire to go West and convinced Betty to move to California. They sold the house and off they went, with little more than several barrels of clothing, a few family mementos and their dreams. They would end up in what he always referred to as Heaven on earth, Redondo Beach, CA. Though he told Betty he had a job waiting for him, his secret purpose was to open a Chicago style Italian Restaurant in California. Like always, When Fred put his mind to something, it happens and later that year, another dream came true……they named it Maddalone's Italian Restaurant and Pizzeria. It was a huge success from the moment they opened the doors and would be a landmark in the Hollywood Riviera for 28 years. During this time, Son # 3, Christopher Dane would join their family. Together they built the business and their family. He became involved in community events, the Chamber of Commerce and the local Church. During the time when the boys played baseball, they met and became friends with the Los Angeles Angel Ball Club. Baseball was a passion during those years for both Fred and Betty. Through the years, life would change, they would separate, but in the end, Fred and Betty reunited and lived together until Betty's death in 2006. Fred would change his career in midlife to that of a Jeweler. He opened the South Bay Gold Company in the Riviera in the late 80's. In the 90's he moved his location to Westminster, Ca. Fred's, hard work, zany personality and dedication to his customer's made him a success in both of his professions throughout his life. He worked everyday up until about a month prior to his death. He is survived by his children, Jeff Maddalone, Carrie Maddalone Kuvakas (George), Dean Maddalone, Chris Maddalone, 6 grandchildren, Deana Janji (Mark), Tony Occhipint (Chelsea), Angie Maddalone, Lacy Maddalone, Milana Maddalone, Nicholas Maddalone, and 2 great grandchildren, Sophia Janji and Lola Janji, his sisters, Nancy Maddalone Caliendo, Toni Maddalone Precht, Joanne Maddalone McMillan, many family members in Chicago and his best friend and companion, Scooter, his dog.