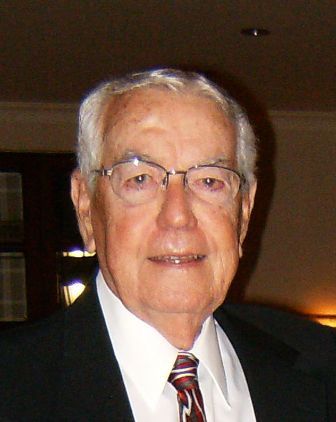 Fred Simeral, 88, passed from this earth into eternal life with his Heavenly Father on Sunday, May 11, 2014 after a long struggle with cancer. His wife of 65 years, JoAnn (Jo), and his three children, Linda, Steve, and Dave, were in attendance to share his last day of life together. While he will be sorely missed by his family which includes six grandchildren, David, Tim, Keri, Francesca, Nicole, Hannah two daughters-in-law, Marina (Steve), Laura (Dave), a son-in law Mike (Linda), and five great-grandchildren, each member shares his Christian faith that promises we will all be together again one day. Fred was born in Steubenville, Ohio on January 20, 1926 to Fred and Claire Simeral. He had one brother, Jerry, who predeceased him by two decades. Fred was a lover of baseball from his early days of park ball at the end of Murphy Avenue, his special childhood home. He went on to become a little league coach and a dedicated Dodger fan. Fred was a Navy medic during World War II, after enlisting in the midst of the war at only 17. He was a life insurance salesman for many years, and served his clients well into his seventies. Fred was a member of the Elks, first in Gardena where he held office and later in Redondo Beach. He and Jo spent many happy days on the golf course until his illness. The end of World War II brought young Fred to California where he met the love of his life, Jo. He told his close friend as he laid eyes upon her for the first time, "I'm going to marry that girl!" and so he did. Fred and Jo's long marriage has served as a model to their children and grandchildren for how to live, putting the other first, through the good and the bad times that come to us all. He enjoyed his friends and treasured time with his family. In the simplest, truest sense, "Dad had a life well-lived." The memorial service will be at Rice Mortuary in Torrance at 5310 Torrance Blvd. on Saturday morning May 17 at 10:00, with interment the following week at Riverside National Cemetery.