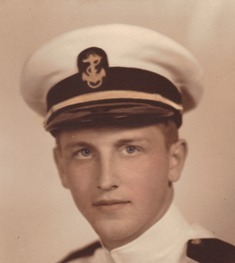 Fred J. Voeste Jr., 95, of Torrance passed away on June 19 with his loving family by his side. He was born on August 18, 1917 in Olpe, Kansas, the only son among the 4 children born to Fred Voeste Sr, and Louise (Rossillon) Voeste. After graduating from Emporia State College, he was excited to be accepted into the US Naval Air Corps, because of his love of flying. He was hired by the Federal Aviation Administration as an Air Traffic Controller, retiring after 35 years. He was a long time member of the Society of Airway Pioneers. Early in his career, his job took him to various posts in the Western US, including Fairbanks, Alaska and Oakland, California, where he met his future wife, Eleanor May. They married in Carmel, California on May 6, 1950, and soon started a family. They moved to Torrance in 1960. Fred was a lifelong Dodger fan, and passed his love for baseball on to his children and grandchildren.. He also coached his son's little league teams. He was an avid sportsman and enjoyed golf, bowling and the horse races. He was a founding member of the original Old Torrance Homeowners Association. He was a devout Catholic who was a member of Saint Vincent de Paul and an usher at Nativity Catholic Church for over 50 years. After his retirement, he and Eleanor enjoyed taking care of their grandchildren and attending their various sporting events. They traveled extensively, including a trip around the world. He and Eleanor also volunteered at Little Company of Mary Hospital for 32 years, and at Travelers Aid at LAX for 28 years. Fred was a wonderful, funny, loving, caring, honest, sweet and generous husband, father and grandfather. He was strong and healthy his whole life, until his health started to fail about 18 months ago. Despite his failing health, he never complained and his mind was sharp as a tack until the end. He was proficient on the computer, paying bills and trading stocks on line, doing the sudoku puzzle every day, and his memory amazed everyone. He will be greatly missed by his loving wife, Eleanor, his 5 children, Marlene (Jack), Jane (Marion), Bob (Teri), Mary Anne (Craig) and Carol (Henry), 12 grandchildren, his sister, Rosemary Fladung and many nieces and nephews. There will be a rosary at the chapel of Rice Mortuary, 5310 Torrance Blvd, Torrance California on Monday June 24 at 7pm with viewing from 4-8pm and a Funeral mass at Nativity Church, Torrance California, Tuesday June 25, at 10am.