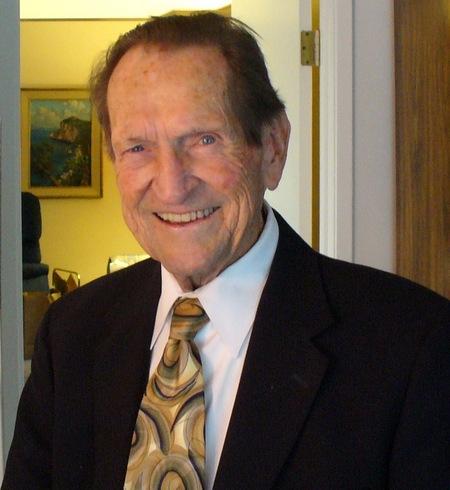 Francis (Frank) Marion Holmes, 93, of Rancho Palos Verdes, died the morning of September 22, 2013. A memorial service to honor his life will be held at St. Paul's Lutheran Church of Palos Verdes, 31290 Palos Verdes Drive West, Rancho Palos Verdes, at 10:00 a.m. on Saturday, October 12, 2013. Francis was born on a farm near Palmyra, Illinois, in 1920, to Glen and Alvena Holmes. He had an older brother, Lynn, and a younger brother, Harry. He attended grade school and, upon completion of grade school, he worked as a farm laborer for three years until, through the kindness of friends, an opportunity arose to attend high school in a nearby county. He had to work 6 hours a night as a cook/dishwasher/waiter to pay for his room and board, but completed high school in three years. At the invitation of the president of Blackburn College, he enrolled there and it was here that he met his future wife, Caryl. After completing two years of college, he enlisted in the Navy as a Naval Aviation Cadet. He was commissioned as an Ensign USNR in April of 1944, with operational qualifications in OS2U aircraft. He was assigned to Scouting Squadron 48 watching for Japanese ships and aircraft in Southeastern Alaska, then reassigned to the Aleutian Islands, and later, he was made the Senior Aviator of the VS48 Detachment Dutch Harbor. He returned to the States in June of 1945, and when World War II ended, he sought release from active duty and was granted same. Frank and Caryl were married and after a brief stay in Florida, returned to Illinois. However, a short time later, he returned to active duty. Over the next 24 years of Navy life, Frank and Caryl would move fifteen times to various locations in Florida, Illinois, California, Hawaii, New Jersey, Maryland, Louisiana, Iowa, and Virginia. Along the way, their family would grow with the births of their three children; Donald in Illinois, John in Hawaii, and Cindy in Maryland. While serving his naval commission, Frank furthered his education by acquiring degrees in Aeronautical Engineering, Nuclear Engineering, and Engineering Management. He enjoyed many aspects of his naval career, but felt his greatest contribution to Aviation and Space programs came during his six years as Project Manager of the Navy Navigation Satellite System and subsequently as the Operations Officer at the Navy Astronautics Group. In July of 1966, Frank retired from active naval service as a Commander, and he and his family relocated to Rancho Palos Verdes, where he embarked on his 2nd career, this time with TRW Systems in Redondo Beach. This career spanned 24 years as well and included a wide variety of challenging assignments in the world of aerospace systems and computer related mission applications. He managed the first study of what is now the Global Positioning System (GPS), served at the US/Australia Joint Defence Research Facility in Australia, and traveled to Italy, where he led a multinational team of engineers in the development of command and control computer system requirements for Commander Naval Forces South (NATO). While Frank retired from paid employment in 1990, he continued to "work", serving as the local coordinator of the AARP Volunteer Income Tax Assistance and Tax Counseling for the Elderly program, Assistant Director of the Retired Activities Office at Naval Station Long Beach/Naval Weapons Station Seal Beach, and at St. Paul's Lutheran Church as an usher and men's group leader. He and Caryl also enjoyed a myriad of cruises and traveling extensively throughout the world. Frank's greatest love was his family; his wife, children, and grandchildren. He was deeply devoted to all of them. Frank is survived by his children, Donald Holmes, John Holmes, and Cindy (Holmes) Knapp; and his four grandchildren, Rachel (Knapp) Miller, Ashley Holmes, Ian Knapp, and Samantha Holmes. In lieu of flowers, donations may be made to: RETIRED ACTIVITIES OFFICE NAVAL WEAPONS STATION SEAL BEACH 800 SEAL BEACH BLVD BLDG. 22, ROOM 2 SEAL BEACH, CA 90740 Checks should be made payable to "RAO SEAL BEACH"