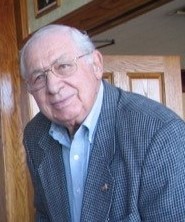 Francis (Frank) John Santangelo, 89, passed away peacefully on Wednesday March 21, 2018 in Manhattan Beach, California. Born in Jackson Heights, New York, Frank graduated from Manhattan College with a degree in Civil Engineering. Following his Korean War service, Frank was married on April 16, 1955 to Clorinda. Soon after, Frank was employed by Turner Construction Company. Turner relocated Frank frequently, which resulted in the Santangelos raising their daughter on both coasts and in the Chicago area . Retiring after 35 years with Turner, Frank became a very active member of American Martyrs Church, including helping with building the gymnasium. Frank is survived by wife Clorinda, daughter Donna Mae Ellis, son-in-law Tom, grandsons Matt and Kevin, nieces, nephews and other family. He was preceded in death by parents John and Dominica Santangelo and his two older sisters. A gathering of family and friends will be held from 2:00-6:00 pm on Sunday April 8, 2018 at Rice Mortuary, Torrance, California. The Service will be held at 10:00 am at American Martyrs Catholic Church on Monday April 9, 2018. Burial will follow at Holy Cross Cemetery in Culver City, California.