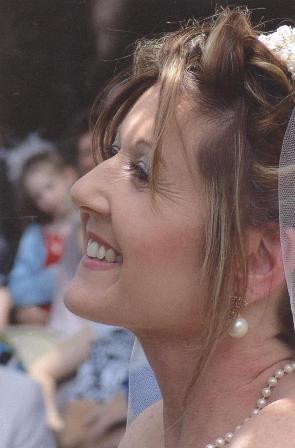 Francesca Marie Hutchins-Huff, beloved wife of Shawn Huff, cherished daughter of Bonnie Hutchins, and devoted step-mother of Adonia Balestrino, joined God's angels on May 23, 2013. Born in Redondo Beach, California on March 21, 1969, she graduated from Redondo Union High School and Northern Arizona University in Flagstaff, Arizona, and completed post graduate work at Cal State Dominguez Hills. She made lifelong friends while working at Tesoro Refinery and Healthcare Partners. Her last career choice was her favorite - teaching third grade in Las Vegas, NV. Her class of under-privileged students (17 boys and 3 girls) gave her many challenges and delights. While there, she created a field trip program funded through recycling. She loved to travel, was a fan of Country-Western music, and became a passionate gardener after moving to Warren, Ohio, with her husband Shawn. Their union was a story from Hollywood. A chance meeting at their 20-year high school reunion brought them together. A spark was lit and the rest was history. Tragically, they only had five short years of wedded bliss. Francesca worked tirelessly on behalf of the Fanconi Anemia Association. She lost her sister Tara to Fanconi in 1993; Francesca was diagnosed in 2006. Her passing was due to complications following a bone marrow transplant to cure the disease. Francesca's father, Robert Hutchins and her sister Tara Hutchins preceded her in death. Her passing will be mourned by family and friends internationally. Please join us for a Celebration of Francesca's life at Rice Mortuary on June 16, 2013 at 4 pm, followed by a reception from 5-8 pm. Committal will be private at Pacific Crest Cemetery in Redondo Beach. In lieu of flowers, donations may be made via PayPal.com to Friends of Francesca FA Fund, dmwade23@msn.com.