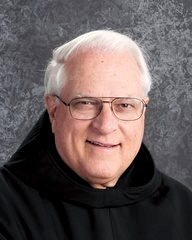 +Fr. Gary Klauer, OFM Conv. (1945-2014) With great sadness the Conventual Franciscan friars of St. Joseph of Cupertino Province announce the passing of Fr. Gary Klauer, Vicar Provincial. He would have been 69 on June 22. For the past few months, Fr. Gary had been suffering from a liver condition. He felt well enough to travel to the Philippines recently for the profession of religious vows for two novices from our mission in Vietnam. During a cruise following the profession, he suddenly fell ill and was sent to a hospital in Vietnam. He was then flown back to the United States under the care of medical personnel from Vietnam and arrived back to a hospital in his home city of San Pablo, CA. It was there that he passed away on the 22nd of April 2014. He was born in Los Angeles, CA in 1945 and graduated from Bishop Montgomery High School in Torrance, CA in 1963. He joined the Conventual Franciscan friars who taught at the high school. He professed his first vows in 1966 and solemn vows in 1969. He attended Loyola University in Chicago and was sent for theological studies to Toronto, Canada. He was ordained to the priesthood on April 5, 1975. (He observed his 39th anniversary of ordination while in the hospital in Vietnam with the local Vietnamese Franciscan community at his bedside). He taught at Bishop Montgomery High School from 1975-1988. He then ministered as a hospital chaplain at Little Company of Mary Hospital, Torrance, CA from 1988 to 1997. During those two assignments he also served as the local superior of St. Bonaventure Friary, Torrance. Fr. Gary served as pastor and superior of the community at Our Lady of Guadalupe Church, Hermosa Beach, CA from 1997-2007. He was pastor and guardian of St. Paul the Apostle Church, San Pablo, CA from 2007 to the present. He has also served as the Vicar Provincial of St. Joseph of Cupertino Province since 2005. Fr. Gary was a founding member of the California Province of the Franciscans when it was formed in 1981. He was an avid sports fan and could boast of seeing a baseball game at virtually every stadium which hosted major league baseball. He was also known to travel to South Bend, IN just to attend a Notre Dame football game. He always showed great appreciation for the Sisters of St. Joseph of Cluny who taught him at St. Catherine Laboure parish elementary school in Torrance. Fr. Gary celebrated the baptisms, weddings and funerals for countless Bishop Montgomery alumni and was a regular, enthusiastic presence at athletic events and homecoming games. Fr. Gary was also known for his phenomenal capacity to remember everyone's birthdays and anniversaries. In 2001, he was among the first to be inducted into the Bishop Montgomery Hall of Fame for his many years of teaching and support of the school. Fr. Gary is survived by his siblings Sally Wright, Diane Kurz (Jerry), Patricia Klauer, Joe Klauer (Arlette) and Barbara Redmond (Richard) and many, caring Franciscan brothers. Funeral Mass will be celebrated on Tuesday, April 29, 2014 at 7pm (viewing at 6:30pm) at St. Catherine Laboure Church in Torrance. A reception will be held for all following the Mass. Fr. Gary will be laid to rest in the Province's cemetery in Arroyo Grande, CA on Wednesday, April 30 at 1pm. In lieu of flowers, the friars welcome donations to the Conventual Franciscans for their Mission in Vietnam (online, franciscanfriars.org).