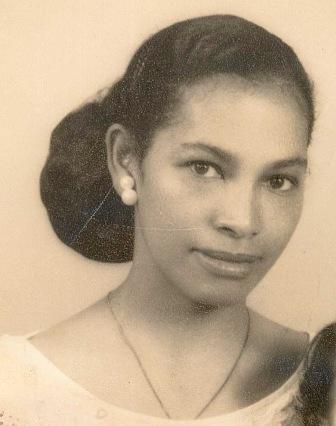 Flossiemay (May) Teague was born on August 31, 1929, to Corbin B. and Mary Constelacion Finney, at Fort Stotsenburg, Philippine Islands. May was the middle child to this union that included her older sister Emma, and her younger brother Corbin. May's family history included being the daughter and granddaughter of two United States 9th Cavalry Regiment "Buffalo Soldiers". Her parents spent their time between the U.S. and the Philippines. Mommy, Auntie Emma and Uncle Corbin were children during World War II, and were present when the Japanese invaded and later occupied the Philippines. The occupation separated their family and the three children were on their own hiding and surviving, utilizing their own creativity for many long months. They participated in assisting fallen, weak soldiers prisoners of war, during the Bataan Death March. By the end of the war, the sisters lost their brother, Corbin. After losing their mother three years later, in January of 1948, Auntie Emma moved to San Francisco, CA while mommy chose to remain in the Philippines. Ever the individualist, on August 7, 1953, Mommy enlisted in the U.S. Navy. She was inducted and completed her boot camp training at Bainbridge, Maryland. While serving her country, Mom tested out of every level of rank as it became available. We said that she would have been the first black woman president YEARS AGO! Her intelligence, wisdom and firecracker spirit was inspiring to all around her. Mommy thrived and quickly reached the rank of First Class (E-6) Store Keeper (SK1). She met dad while both were serving in the U.S. Navy at Barber's Point, Hawaii, and later married December of 1958. To this union four children were born: Joy, Michael, Eden "B.B." and Joel. Mommy and dad extended their love to include Armando Nestor Ramos, who lost his mother at birth. Upon an Honorable Discharge from the Navy, Mom completed her Bachelor's Degree in Business Administration at Far East University in the Philippines. She later became a homemaker with the family settling in Lemoore, the Central Valley of California. While raising her four kids, she found time to take classes, furthering her knowledge or simply for pleasure. While in Lemoore, she met Floyd and Lou Hall's family who became an extended family to ours. She enjoyed gardening, and with a simple butter-knife was able to make magic happen in anyone's yard! Mommy loved to do puzzles and read. She instilled this love of reading and focused on education to everyone she came across. Her usual response when asked a question by a young person was, "Did you look it up yet?" This love of reading extended to reading the Scriptures, and magazines and other publications from the Watchtower Bible and Tract Society. In 1980, Mommy dedicated her life to Jehovah, and has always kept him close to her heart. Mom is survived by her husband of fifty-five years, Joe Teague; Daughter Joy (George) McFarland, Inglewood, CA; Michael (Rochelle) Teague, Dallas, TX, Eden "B.B" Teague, San Francisco, CA; Joel Teague, Sacramento, CA. Grandchildren: Mary, Chris (Shaunté) and Scott McFarland, Jessica and Jeré Powell, Sharae and Cierra Teague, and Takayla Otis. Mommy was also able to see her first and only great-grandchild, Christopher James Franklin, Jr. "C.J.". To also cherish her memory, are Mary (Joe) Watson, James Taylor and Darryl Taylor and Ruby Wortham along with a multitude of family and friends. Mom also had a large extended family that provided loving care in her later years. These individuals/organizations include: The entire staff at Windsor Gardens, Hawthorne CA; Norma Gil; Ashley Gil; Ariana Hall; Morningside Adult Day Program; The entire staff at Westchester Villa Assisted Living; The entire staff at West Los Angeles VA Geriatric Clinic, and finally the nursing staff and Palliative Care Team at Providence Little Company of Mary, Torrance CA.