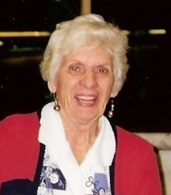 Pat Yates April 2, 1927 December 9, 2015 Pat, age 88, passed away on December 9th. She was born in Billings Montana on April 2, 1927. Growing up in Billings, Pat was a natural athlete and won many blue ribbons in the annual city-wide track meet and played catcher on her high school softball team. Also while in high school, Pat played clarinet in the school band, was a flag girl, and was active in her local 4H club. Pat was married to Mel Yates in Billings in 1947 where they continued to live until they moved to California in 1953, and settled in Torrance. Pat's and Mel's lives were full and they had many friends, most notably the neighbors they had while living on Newton Street that became their closest and lifelong friends. Pat was primarily a stay at home mom and dedicated herself to raising her six boys and supporting them as they participated in youth activities and sports. Pat was very active in St. Lawrence Martyr. She was a founding member and was the 1st Guild Captain during the campaign to build the first church. She was a past president of the women's council at St. Lawrence and also taught religious education at St. Lawrence. Pat was a past PTA president for both Newton Middle School and South Torrance High and recipient of the PTA Honorary Service Award. Pat loved Christmas and devoted much of her life designing and decorating Christmas trees in support of the annual Festival of the Trees event that raises money for Torrance Memorial Medical Center beginning with the first event in 1984 and every year thereafter through 2014. She was a past president of Las Amigas and spent each year, beginning in January, dedicated to her trees. Pat was passionate about community service and remarked that the initial years of the Festival of the Trees were some of the happiest times of her life. Pat was preceded in death by her husband of 60 years Mel in 2008 and her parents Nick and Luzetta Rambold. Pat leaves behind her six loving sons, John (Nan), Richard (Louisa), Jim, Dan, Tom, and Kevin (Stormi); grandchildren, Ryan (Kadie), Rowdy, Strummer, and Navy; and great grandchild, Emma. Services will be held on December 21st at St. Lawrence Martyr Church at 2:00 pm.