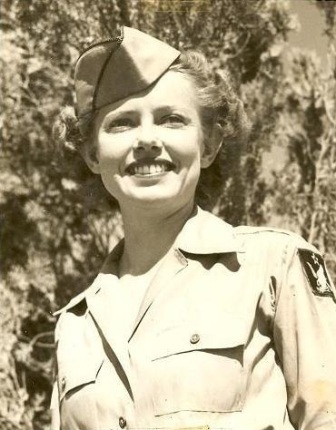 Florence Ernestine Evans nee Bose, 95, died March 5, 2016 at her home in Torrance, California from age related causes. She was born April 2, 1920 in Emerson Township of Harlan County, Nebraska the daughter of Chris W. and Esther C. Bose nee Reuben. Florence graduated with honors from Stamford High School in Stamford, Nebraska. In 1943 (during World War II), she joined the Women's Army Corps (WAC) and was assigned to Biggs Army Airfield, El Paso, Texas. Florence worked at headquarters processing troops 'In' as they reported for duty at Biggs Field. Florence met her future husband as she attempted to process him 'In' from the China-Burma-India Theater of War. Processing consisted of a lot of paperwork-medical, pay, shot, clothing records, etc. The only paperwork her future husband had was a pay book and a shot record. It took time for his records to catch up to him-they, along with others, had been entrusted to an individual who was 'hand carrying' them. Headquarters personnel were under the gun from the base commander to locate the individual who was 'hand carrying' the records - he took a short (unauthorized) leave before reporting to Biggs Field. As a result, Florence's future husband had to check in with her daily. Months later, on September 8, 1944, Private Florence Bose married Staff Sergeant Jacques Evans at Las Cruces, New Mexico. Through the years, Florence was active with the Girl Scouts. She served as a Girl Scout Leader at airbases where her husband was stationed as well as with the Girl Scouts overseas arm. In Europe, Florence served as a Girl Scout Leader and traveled extensively. She was fond of a photograph taken at the International Girl Scout Chalet in Switzerland where she, and her daughters, were dressed in their Girl Scout uniforms. In her later years, before she retired, Florence worked as a travel agent in Southern California. Florence is survived by her husband and two daughters: Jacques Evans of Torrance, California; Melissa Robb of Malmesbury, England and Jo Anne Appel of San Francisco, California; also, by two granddaughters: Sidney Robb of Malmesbury, England, and Sharon Meetsma of New York, New York. Florence is predeceased by three sisters and four brothers. Memorial contributions can be made to the Girl Scouts of the USA, the Oxford Library or the Stamford Cemetery Association.