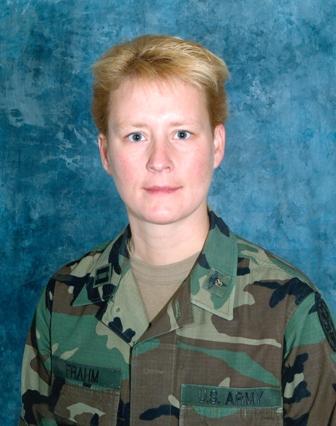 CPT (Ret) Fayette M. Frahm entered the military in 1991, as a Combat Medic. She was elected for Sergeant in 1993. She was then selected for the Green to Gold program in 1996. While attending the California State University she was voted The Outstanding Female Professional for the class of 1999, receiving the "Jame Denue Award". Upon graduation in 1999, she was immediately stationed in Vilseck. Germany with the 201st Forward Support Battalion (FSB) where she served Company Executive Officer as they deployed to Kosovo in 2000. While in Kosovo she participated in over 23 Medical Humanitarian missions. Once redeployed, with the 20 1st FSB she held the positions in the Charlie Medical Company of Executive Officer, Platoon Leader and Rear Detachment Commander. Shortly afterward, she was assigned to the Grafenwohr Medical Clinic as the Executive Officer. In May 2003, she returned from Germany where she graduated the Officer Advance Course with accolades and received the Commander' Certificate for Physical Fitness, FT Sam Houston, Texas. From there she came to FT Bliss, El Paso, Texas, to assume command of Bravo Company, the largest company, at William Beaumont Army Medical Center (WBAMC). In August 2003, she was nominated for the General of the Army Omar Bradley Award. In October 2003 the 31st Combat Support Hospital (CSH) Battalion of the 31st Air Defense Artillery Brigade, received orders to deploy to Iraq to replace the 21st CSH. As the 31st CSH was gathering soldiers to fill vital professional medical positions (also referred to as PROFIS), a large number of her soldiers from WBAMC were tasked to fill these PROFIS positions. She volunteered and was hand-selected to be a 31st CSH Company Commander. The deployment training began in October 2003, and in January 2004, she and the command led over 500 soldiers to Iraq in support of Operation Iraqi Freedom (OIF). Once in Iraq, the 31st CSH was split into two separate hospital units; one in Balad and the other in Baghdad. She served as the Company Commander of the hospital in Balad, Iraq. During the redeployment of the 31st CSH back to FT Bliss in October 2004, she stayed in Iraq where she was assigned a follow-on mission to Afghanistan in support of Operation Enduring Freedom (OEF). She served as the Executive Officer of the 933rd Forward Surgical Team attached to the 25th Infantry Division, located at the Forward Operating Base in Tarin Kowt, Afghanistan. Finally, returning to FT Bliss, in February 2005 she was selected for her Master in the Baylor Program of Healthcare Administration. In October 2007, she was medically retired for injuries incurred in support of both OIF and OEF wars. CPT (Ret) Fayette M Frahm lives in El Paso, Texas, where she is leading a team of five other professionals in the EI Paso community in a volunteer project to improve the Continuity of Medical Care and Quality of Life for Soldiers transitioning from Active Duty. Her military awards include the Bronze Star Medal, Army Commendation Medal (2nd Award), Army Achievement Medal, Reserve Components Achievement Medal, National Defense Service Medal (3rd Award), Afghanistan Campaign Medal, Global War on Terrorism Expeditionary Medal, Kosovo Campaign Medal with Bronze Service Star, Global War on Terrorism Service Medal, Non-Commissioned Officers Professional Development (2nd Award). Army Service Ribbon, Oversea Service Ribbon, Military Outstanding Volunteer Service Ribbon(MOVSM), and the NATO Medal. She is also authorized to wear the Combat Medical Badge, the Combat Action Badge and the German Proficiency Badge (Bronze).