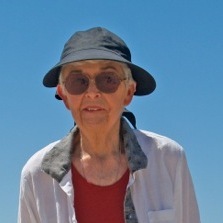 Faraday Bartos passed away peacefully at home July 5, six months after celebrating her ninetieth birthday with family and friends. Faraday was born January 28, 1923, in Evanston, Illinois, where her parents, John H. Ransom and Louise Hambrecht Ransom were attending University of Chicago. Her father, who became a well- known physicist, insisted on naming her after Michael Faraday, the English physicist who discovered the basis of the electromagnetism field, whom he greatly admired. Faraday's family moved back to the L.A. area where her brothers Phillip and Roger were born. She was a math major at UCLA when WWII started, and Faraday left school to join the U.S. Navy WAVES. She served as an aerographer stationed in New Jersey. In 1944 she married John Roman Bartos and they had four children: Jonel, Holiday, Camilla and Christopher. They rejoiced in their eight grandchildren and five great-grandchildren. John and Faraday enjoyed a loving marriage which lasted 59 years until John passed away. Faraday and Johnny were early settlers of Manhattan Beach. Until her death, Faraday resided in the house that they built by themselves in 1948. Their home became a magnet for family, friends, food, song and sharing. The Bartos home was a welcoming refuge for countless friends, relatives, foreign exchange students, and passing travelers. Faraday's many talents included knitting, sewing, quilting and painting. She loved music and played the guitar beautifully. She taught guitar at her home studio, and at Adult School in San Pedro. During this period of her life, Faraday went back to college, and graduated from Cal State Dominguez with a degree in linguistics. Faraday and John were members of the Tweedy Lake Club and enjoyed their cabin there for many years. She was active in many organizations, PTA, Boy and Girl Scouts, Garment Wizards, Omnilore, WOWS, to name only a few. Faraday and John became early members of the MBCC then located on Highland Ave. These early "Church Friends" became the foundation of the life they built in Manhattan Beach and she remained active in MBCC throughout her life. She was the first woman Moderator, joined Mariners, Shipmates, Women's Fellowship, Needlecrafters, played guitar for Easter Sunrise Service, participated in study groups, and many more . Faraday had deep roots in the South Bay, going back to the nineteenth century. She was a granddaughter of Julia V. Ransom, a well- known resident of Hermosa Beach. Julia had come to California with her family in the Yarnell Wagon Train in 1866. She provided a wonderful example of the Pioneer Woman for Faraday. And Faraday has passed on her strength, talents, determination, and adventuresome spirit to her family. The family would like to express their deep appreciation to Torrance Memorial Hospice and to Faraday's longtime caregiver, Marie Moise. A memorial service will be held on Saturday July 13 at 2:00 pm at the Manhattan Beach Community Church, 303 S. Peck Ave., Manhattan Beach, CA 90266. Visitation will be on Thursday July 11 from 4:00- 8:00PM at White and Day, 3215 Sepulveda Blvd., Manhattan Beach, CA 90266, www.lafuneral.com. In lieu of flowers, the family requests donations for the Cystic Fibrosis Transplant Program. Gift should be made to : MBCC - Faraday Bartos Memorial Fund Manhattan Beach Community Church, 303 So. Peck Ave. , Manhattan Beach, CA 90266.