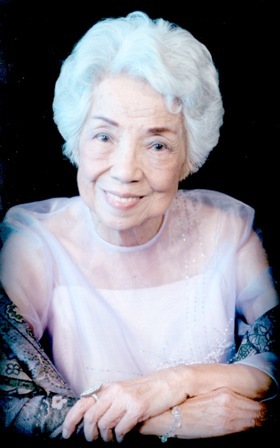 Esther Suarez Nacion was born on June 26, 1914 in Lilio Laguna, Philippines to the late Mercedes and Vicente Suarez. She was the eldest of 7 children; Gustavo, Fe, Noemi, Vicente Jr., Gloria, Renato, Luz, and Nelia. She later moved to Zamboanga City, Philippines where her father resided as the Mayor. Years later Esther moved to Manila to pursue her love and passion for literature and education and there she met the love of her life, Dominador Nacion. She attended Philippine Normal College (PNC) where she obtained her degree in Education. Esther loved her career as a Home Economics teacher; she was a world traveler and a woman of culture. She loved spending quality time with friends and family, cooking, listening to music, reading, and dancing. She was very much involved in community service and a dedicated catholic member of the legion of Mary. Among her many accomplishments she was most proud of having raised her only son, Diosdado Nacion Sr. , and her five grandchildren Diosdado Jr., Rowena Eloisa, Anita Esther, Mark Jason, and Stephanie Mae. Diosdado Sr. together with his wife Emilie Aquino Nacion worked hard to establish a life in the United States where Esther and Dominador happily lived out the rest of their lives. Esther lived a meaningful life filled with happiness and moments spent with her loved ones. She herself stated "I lived a full life"… she smiled and nodded in satisfaction. There's a poem she hoped to live by "If I should live to a ripe old age may I possess some bit of charm, individuality, and wit. That I may not be discarded when I am withered worn and weak, but sought after and cherished like a fine antique" - unknown Not only did Esther possess all those qualities she hoped, but like a fine antique she was treasured and cared for until her finest hours. She lived to be 100 years, 11 months, 4 days and she fought to stay with her beloved friends and family until the very end. Esther was loved deeply by many and respected by all. She will greatly be missed but never forgotten as she will forever live on in our hearts. "Her love has become a part of us, interfused with our lives, blended with our minds and memories, hallowed forever within our souls , what is good shall remain lovely and indestructible." In remembrance of Esther we will be celebrating her life, light and love with a gathering of friends and family at Rice Mortuary in Torrance, 5310 Torrance Blvd, CA 90503 on Thursday June 18, 2015 and Friday June 19, 2015 from 4 pm to 9 pm. Memorial services will be held at Holy Cross Cemetery 5835 West Slauson Avenue, Culver City, CA 90230 on Saturday June 20, 2015 9:30 am. A reception will immediately follow at Proud Bird Restaurant 11022 on Aviation Blvd. Los Angeles, CA 90045 from 11 am to 4 pm. Thank you to everyone for the outpouring love, prayers, and support at this very difficult time. If you would like to honor Esther by sending flowers, the family requests that the flowers be only white.