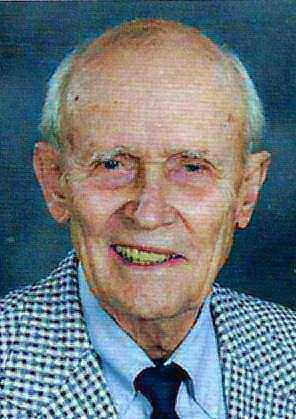 Ernest (Ernie) Lincoln Johnson [93] passed away on June 24, 2012 in Bakersfield with his daughter Lisa Hawkins at his bedside. Raised in Minnesota, Ernie graduated from the University of Minnesota. He was a CPA. He married Doris Manikowske March 6, 1942 at the First Congregational Church of Minneapolis. Ernie was a WWII veteran. He was a Second Lieutenant in the Army Air Force. On his twelfth mission as a navigator his plane was shot down on February 25, 1944 and he was a prisoner of war in Germany for 14 months. He was liberated May 1, 1945. Ernie was a long time resident of Manhattan Beach Ca. where, in 1947 he and his late wife Doris built their home themselves by hand. Very active in the Manhattan Beach Community Church for 65 years where he was involved in Mariners, Shipmates, Wednesday Work Crew and was Recording Treasurer for several years. Ernie was self-employed as a CPA and then became employed by Northrop until his retirement. During his retirement he was active teaching literacy to adults as a volunteer. Ernie enjoyed hiking, camping, raising vegetables, church activities, family and friends. Ernest is survived by daughter, Lisa Hawkins, grandson, David Musick, granddaughter, Kelly Hawkins Torres (Mrs. Christian Torres), his brother, Leonard Johnson, his sister-in-law, Ruth Purdon and many nieces and nephews of the Purdon, Krienke, Hunter and Roehl families. Ernest Johnson was preceded in death by his son, Scott Johnson and his beloved wife of 63 years, Doris Johnson. A Celebration of Life service for Ernie will be held at 4:30 p.m. on Wednesday, July 18, 2012 at the Manhattan Beach Community Church, 303 South Peck Avenue in Manhattan Beach with a reception at the church immediately following. If you feel like it; wear green, Ernie's favorite color. In lieu of flowers, donations in Ernie's honor may be made to the Manhattan Beach Community Church.