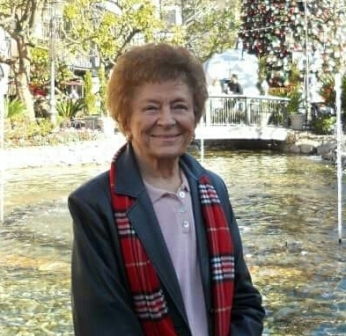 It is with great sorrow that we share the passing of our mother, Emily Mae Krzycki on Tuesday November 10, 2015. She passed at the age of 84 at home in Torrance surrounded by her family. Emily was born in Platte Center Nebraska on July 22, 1931 to John and Laura Gdowski. She enjoyed ballroom dancing, playing bunco and lotto, watching Wheel of Fortune and Shark Tank, bowling, golf and entertaining family and friends. Her passions were caring for her beautiful orchids and roses. She will be remembered for her smile, her crystal blue eyes, kindness, her love, talkative nature, hospitality and generosity. And also will be remembered for bringing her family together for the holidays where she made the best meals in town and had the most beautifully decorated home. She grew up on a farm and later met her future husband Richard through her brother. They married at the U.S. Naval Chapel in San Diego CA on October 2, 1950. At the end of his enlistment, they finally settled in West Torrance. After raising their children, she became an Instructional Aide for children and later special needs children. She loved her job and retired from the Redondo Beach School district in 1995. She is preceded in death by her parents, her brothers John Jr and Myron, sister Margie, daughter Patricia and husband Richard Krzycki. She leaves behind her daughter Linda; son in-law Richard; son James; daughter in-law Evelyn; grandchildren, Nicole, Brittney and Kiana; brother Mark and grand-dogs Roxy and Baily. She was a loving wife, mother, grandmother, aunt and friend. A celebration of life will take place at the Rice Mortuary, 5310 Torrance Blvd., Torrance, CA 90503 on Monday November 16th from 6-8pm. Funeral Mass will be held at St. James Church, 415 Vincent St., Redondo Beach, CA 90277 on Tuesday November 17th at 9:30am followed by cemetery services at Holy Cross Cemetery, 5835 W. Slauson Ave., Culver City, CA 90230.. Immediately after, we will return to St. James Hall.