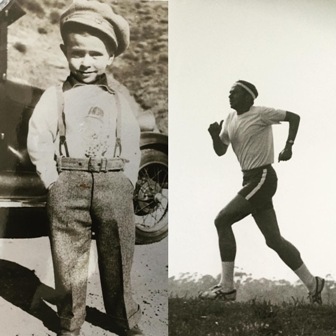 Emil Richard Blum Sheridan, Wyoming, February 25, 1930- Manhattan Beach, CA, August 5, 2016 Our beloved Dick Blum is running an eternal marathon in heaven… Husband, father, uncle, friend, advisor, jokester…. Dick Blum was a force of nature and a Renaissance Man. He grew up in Wrightwood, California in the San Gabriel Mountains where he tied his own flies as a kid and fished in the streams around his tiny mountain town, population of around 300. Attending Pasadena City College and UCLA, Dick served as an Army Corporal from 1953-54 in Germany during the Korean War. Upon returning to California, he met and fell in love with Barbara Jean Angell and they were married on February 11, 1956. A long time banker, he coined (get it…coined??) many nicknames such as "the Loan Arranger" and "Banker Blum" Until about the last ten years of his life, he was an athlete… backpacking in the rugged Sierra Nevada Mountains, running 17 marathons in his lifetime as well as swimming in the Pacific right down the hill from the family home in Manhattan Beach… EVERY day for many years- summer or winter. When running was too difficult when he was around 65, he would bike 40 miles per day for many more years…. just sayin'… He was an avid reader of pretty much everything published in English, a consummate movie buff, and an enthusiastic music lover from Beethoven to Radiohead to Miles Davis to Jefferson Starship. He took exceptional care of his cars and had a Model T that he bought with money earned digging ditches and other odd jobs by the age of 13. Many, many more cars followed. Richard " Dick" Blum is survived by his loving wife of 60 years, Barbara Jean Blum (nee Angell), their children, Lorraine Elizabeth Wressell (nee Blum) and Richard Eric Blum, his grandson, Miles Sterling Blum, his sister, Mary Louise Enockson ( nee Blum) , his niece, Gretchen Janson (nee Enockson), his nephew, Erik Enockson, his great niece, Emma Janson and great nephews, Matthew and William Janson. His mother, Nadine Elizabeth Blum (nee Storm), father, Emil Joseph Blum and his brother Brian Christopher Blum preceded him in death. A private memorial will be held on the beach in Manhattan Beach that he loved so. His ashes will be scattered off our coast so he can run and swim forever.