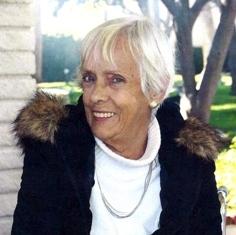 Elizabeth Maryann Stricat 8/6/33- 6/28/13 "Maryann" died Friday June 28, 2013 in hospice in Long Beach, California, following a series of strokes. She was 79. Born on August 6, 1933 in South Bend, Indiana, she was the second child of Charles Patrick Stone and Angela Cornell Wagner Stone. She is predeceased by her older sister Patricia Stone Oberlin, of Fort Wayne, Indiana and is survived by her younger brother, Charles L. Stone of Fresno, California. While in school, she performed on the piano and in choir. She wrote, directed and performed in drama productions. She competed in speech competitions and sports, and graduated from Central High School in Fort Wayne, Indiana in 1951 as an honor roll student. Maryann attended Indiana University for one year, then returned to Fort Wayne and worked at Magnavox Corp as a corporate cashier, and later managed the Gerber- Haus Hotel in Fort Wayne. During her 20's, she excelled in golf and bowling. She met and married John Robert "Jack" Stricat and had 1 daughter, Sharisse Ann. She later divorced and moved with her daughter to Southern California in 1963. She worked as a commercial artist and bookkeeper. Re-inventing herself, "Liz" then became a successful realtor and won top sales awards with Walker and Lee, Inc. in Orange County, CA. Always adventurous, she enjoyed swimming, the ocean, and even scuba diving. She was an avid reader her entire life. She lived intermittently with her late mother Angela and late step-father Lloyd Krewson, and also spent several yrs in the desert and San Diego areas. She struggled for many years with mental illness and alcoholism, but was always positive and looking toward a better future. She loved "Mother Nature" and spent happy years in the mountains in Big Bear, CA before moving to her casita on the beach in Ensenada, Mexico. She finally found treatment for bipolar disorder, but other illnesses led her to move back to the Los Angeles area. Elizabeth Maryann was never afraid of what life sent her way, and remained loving and generous. She always said she was grateful for what God had given her, for her loving family who stood by her, and for Alcoholics Anonymous. She often quoted their Serenity Prayer: " God grant me the serenity to accept the things I cannot change: courage to change the things I can: and the wisdom to know the difference" Per her request, her ashes with be scattered in the Pacific Ocean.