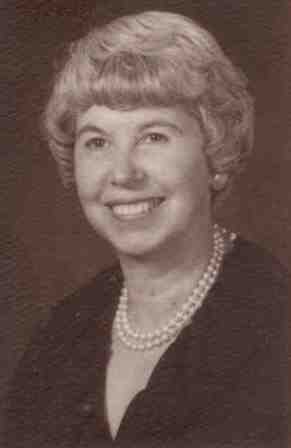 Elizabeth Driggs Oberg was born in San Gabriel, California on September 8, 1915. She was the oldest daughter of Ruggles and Mabel Driggs. Her two younger sisters, Lucy May and Alice preceded her death. She met her husband, Ollie, in high school and they were married on June 5, 1937. They began their married life in Inglewood, California. In 1941, they bought their home in a new suburb of Los Angeles name Westchester (at that time there were only 5 homes on the block) where they resided their entire lives. Betty (as she liked to be called) and Ollie had two daughters, Margaret (known as Peggy) and Linda who both still live in Westchester. Betty was a homemaker and during World War II was an Air Raid Warden in her neighborhood. She had a great love of dogs and big ones at that! Betty and Ollie loved the "ponies" and spent many a day at Hollywood Park with their friends. She would always bet on the grey ponies. She used to say, "Hurry up, get on up there!" At 95 years of age she still enjoyed going to the races. Betty and Ollie were blessed with almost 40 years of marriage until his passing in 1975. They traveled to Mexico many times and spent almost a month in Europe. Family trips to Yellowstone, Yosemite, Seattle, Death Valley and so many other places are captured on film in hundreds of wonderful photographs and slides. They were photography enthusiasts and Betty and Ollie spent countless hours developing and printing pictures in their own darkroom. After Ollie's passing, Betty continued her travels with Peggy visiting Spain, New Zealand and Alaska. She traveled with Linda and her grandchildren to Hawaii numerous times. Her last trip was to Las Vegas to see the show "Jersey Boys" and "pull the one armed bandits" as she like to call them. Her greatest pleasure in her later years was watching her grandchildren and great grandchildren grow and play. She was always at their ice skating, tennis and baseball competitions. She sewed many Halloween costumes and beaded many ice skating and tennis outfits for her granddaughters. Baseball was a sport she truly loved. She followed it long before the Dodgers arrived in LA and listened to it on the radio long before games were televised. In her later years, she never missed a game her grandson and great grandson played in if she could help it. Even at 97 years of age she still enjoyed baseball. You could always hear Betty from the stands cheering: "Come on Tommy, get a hit!" or "Hit one for grandma, Mikey!" She would cheer for Angel running the bases around a T-ball game she liked the game so much. Betty lived a long and healthy life and passed peacefully in her own home in the company of her family. She will always be remembered by Peggy, Linda, Bob (her beloved son-in-law) and her grandchildren and great grandchildren. She has now gone to begin her eternal life in heaven and we know one day we will all meet again probably around that third baseline or behind home plate. The family requests in lieu of flowers you may donate to the LA Mission or any charity in Betty's name.