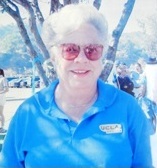 Elizabeth Holland July 24, 1937- Oct 10, 2016 Resident of Torrance Elizabeth "Betty" Holland passed away peacefully on October 10th. She was 79 years old at the time of her death and passed away due to complications from COPD. Elizabeth Ann Holland was born on July 24, 1937 in Chicago, Illinois. She was the fifth child born to Ernst and Mary Fritz, both of whom preceded her in death. Elizabeth graduated from St Philomena Commercial High School in Chicago and was an accomplished typist in her youth. Prior to that she played Clarinet in the St Celestine School Band in 1950. Upon graduating high school Betty moved to California to join her eldest sister Lillian to enjoy the sun and fun in California. While in California Betty met her late husband Leonard 'Dutch' in 1956 on a blind date. After dating for a period of time they were wed on March 2, 1957. Shortly thereafter they started a family in 1958 with the birth of their son Dale. A daughter Patti followed in 1959. Betty and Dutch were especially pleased to celebrate their 50th wedding anniversary in 2007 with about 75 close friends and family. Betty was a hard worker and spent nearly 40 years volunteering in the South Bay. Perhaps the most significant accomplishment in Betty's life was her volunteer work. She was a Girl Scout leader, volunteer at St Catherine Laboure church, Torrance Farmers Market, Torrance Area Youth Band, Torrance Rose Float Association, Las Amigas, Las Hermanas and assisted her late husband Dutch with his volunteer activities. She was President of the Torrance Rose Float Association for 3 years. Together Betty and Dutch were honored as distinguished citizens by the city of Torrance in 2008 for their countless years of volunteer work in the South Bay. Betty was always willing to help out and is to be commended for having given so much of her time to others. Anyone who worked with her understood her passion, spirit and hard work. Betty was also a prolific craftworker having participated in countless craft fairs. These volunteer activities kept her in great shape to enjoy other things in life that she cherished. Betty and Dutch were avid travelers and traveled the world. They visited Hawaii, Europe, Caribbean, cruised in Alaska and traveled with the UCLA fan club to many UCLA football games. Betty (with Dutch's help) fed the UCLA band with snacks at many of the games they attended. Sports was one of the biggest activities in Betty's life. She and Dutch were avid UCLA boosters and supported the football team at fundraisers and attended games for nearly 30 years (both home and away). Born in Chicago Betty has followed (and suffered with) the Chicago Cubs for her entire life. Earlier in the late 60's and early 70's Betty volunteered at North Torrance West Little League in various positions including Treasurer. Betty touched the lives of everyone she met with passion and willingness to volunteer her time to others. She taught those around her that giving your time may be the greatest gift of all. Her family is grateful for her long life and commitment to raising her family. Betty was preceded in death by her late husband of 56 years Leonard 'Dutch'; and is survived by her son Dale (Barbara); daughter Patti (Jeff); grandchildren Geoff, Brandon and Amanda; honorary grandchildren Jason, McKenzie and Joshua, brother Fred of Florida Keys, Florida; sister Shirley of Indianapolis, Indiana and numerous nieces and nephews. She was preceded in death by her parents Ernst and Mary Fritz of Chicago, Illinois; sisters Lillian and Loretta and brother Ernie. Betty's family would like to thank Rice Mortuary, Torrance Memorial Hospital, Davis In Home Care, ACTS (All Care To Seniors) and Optimal Hospice for their support over the last year. They would also like to extend a special thank you to Kovacs-Frey Pharmacy, Dr. Maria Vollucci, Rick and Nancy Hill, Ruth and Paul Chase, Virginia and Jerry Dixon, Saleem and Ambreem Awan and other neighbors the Jacksons, Herrons, Englishs, Kestles and Kramers. To the numerous family members and friends who have recently called or checked in on Betty, your love for her has meant so much to us all. A public memorial is scheduled for Friday, November 18, 2016 at 11am at Rice Mortuary, 5310 Torrance Blvd., Torrance, CA. A reception at the same location will immediately follow the memorial. In lieu of flowers the family is requesting donations be made in Betty's memory to Optimal Hospice 5000 E Spring St., Suite 525, Long Beach CA 90815 Phone (562) 494-7687.