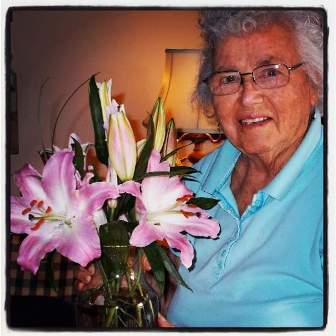 Eleanor Ruth (Stewart) Brent, mother to John Brent of Orange and Jeff Brent of Santa Barbara, passed away peacefully in her home on April 21, 2017 at the age of 91. Eleanor, the daughter of Martha and Roy Stewart, was born in San Bernardino in 1925, where she attended San Bernardino High School and owned a horse named Ginger. During World War II she worked as an Operator and Payroll Clerk for the Phone Company. Eleanor met Forrest Brent at a friend's wedding; she was a bridesmaid and he was a groomsman. After marrying, they moved to Manhattan Beach and had two sons. Once her boys started school, Eleanor became a school volunteer, and as they grew, she started helping in the office, finally accepting a paid position. She worked as an elementary School Secretary for three decades. For her many contributions Pacific Elementary dedicated the school Library in her honor. Eleanor loved the community of Manhattan Beach and lived there for 67 years. She consistently won blue ribbons at the Olde Hometown Fair for her zucchini relish. After retiring, Eleanor traveled with her husband Forrest and took up woodworking and crafting. She got together often with longtime friends in her "Stitch & Bitch" group, but Eleanor always made time to look after her beloved grandchildren Heather, Forrest and Alexandra Brent. After her husband Forrest passed in 1999, Eleanor stayed active, becoming a regular of the Sea Aire Women's Golf Club, traveling to see friends and family, and playing Cole Porter tunes on her organ. Eleanor was a giver and a people person. She was widely admired for the quilted baby blankets and elaborate birthday cakes she created for those in her extended circle. Fiercely independent, Eleanor did her own gardening, cooking and cleaning until the age of 87. After a health setback in 2010, she not only completed rehab, but drove herself to Zumba Gold class twice a week where she was the inspiration of women decades her junior. In the end, Eleanor will be remembered for her quiet thoughtfulness and generosity to others, always there with a kind word, a warm dish, and a thank you note. In lieu of flowers, please donate to the Children's Hospital of Los Angeles or the charity of your choice.