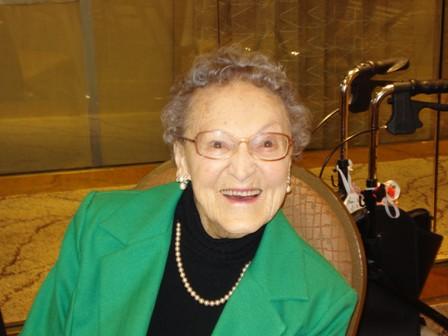 Eleanor "Penny" Hamilton September 13, 1919 – November 1, 2012 Eleanor J. Sawtelle was born the oldest in a family of five children in Philipsburg, Pennsylvania. When she moved from Pennsylvania, she boasted so much about her home state that she acquired the nickname Penny. While she was in the Army for 1 ½ years she met Herald H. Hamilton and they were married November 3, 1945. Their home was blessed by three children; James, Jack and Donna. Penny didn't work outside the home since the children needed continuity in the 18 moves they made during Herald's Army career. They had 2 tours of duty in Germany. Everywhere they went they were involved in church work from Orphanages to Senior Nursing homes. Retirement from the Army brought them to Redondo Beach. Herald died May 5, 1972. Penny went to work as a Preschool teacher for 17 years. She taught Junior High Sunday School girls for 11 years at Redondo First Baptist Church. She stayed in the area working and living for the Lord until February 2010. Then, because of health issues, she moved to Washington State to live with her daughter, Donna. She died on November 1, 2012. She leaves behind her children, James and Debbie Hamilton of Euless, Texas; Jack and Laura Hamilton of Chino Hills, California; Donna and Dale Colen of Olympia, Washington. She was blessed with 8 Grandchildren… Daniel, David, Heather and Brandon Colen; Christine and Chris Fore; Holly and Eric Calderon, and 7 Great Grandchildren… DJ Colen; Elijah White, Quentin and Peyton Colen; Nate, Taylor and Josiah Fore. Memorial Service will be held at Seacoast Church in Redondo Beach, CA on November 23, 2012 at 11:00 AM. In Lieu of flowers please make Donations to Seacoast Church of Redondo Beach, California. "I know the plans I have for you says the Lord, they are plans of good and not of disaster to give you a future and hope" Jeremiah 29:11