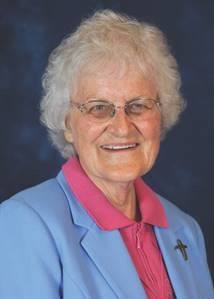 Sister Elaine Stephan, CSJ, died October 11, 2020 in Los Angeles CA, the same city where she had been born on August 24, 1937. She was the daughter of the late Carl and Margaret Novetske Stephan.

Sister Elaine attended Mark Keppel Elementary in Paramount and Bellarmine-Jefferson High School in Burbank, both in California. She graduated from Mount Saint Mary’s College, now University, with a Bachelor of Arts degree and later obtained a Certification in Alcohol Studies from Seattle University in Washington State. During the first years as a sister, she ministered as an elementary school teacher but spent most of her career as a substance abuse counselor at different organizations around the greater Los Angeles area including Daniel Freeman Hospital, Kazi House, Patterns Behavioral Health Services and Family Services of Los Angeles. She also worked at House of Yahweh, Didi Hirsch Community Center and A Place Called Home.

Sister Elaine was known for her friendly smile, kind demeanor, zest for life and love for those who needed support in conquering addictions. She is survived by her sister, Irene Gallon; her niece, Eileen Christofferson; nephews, Dan, Tom and David Slort; and the Sisters of St. Joseph.