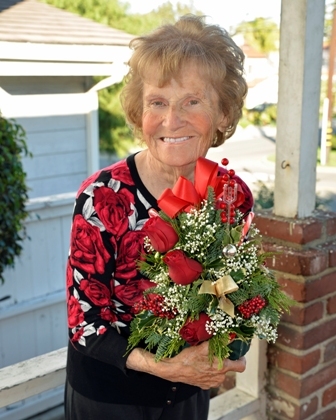 Elaine Scholz, 82, passed away on June 14, 2015 in Torrance, California. Elaine was born on December 6, 1932 in Pittsburgh, PA to Daniel Jefferson Kennevan and Ana May Dubar. Her parents died at an early age and she was raised by her foster mother Jane Chalinor. Elaine grew up in a suburb of Pittsburgh and moved to Bakersfield, California at age 15.She attended Garces High School and later moved to Manhattan Beach. Elaine married Joseph Scholz in 1955 in Bakersfield, California and was happily married for 60 years. Elaine was a dedicated wife, mother, and grandmother. Elaine served as a Eucharistic minister at American Martyrs Church. Elaine provided love and support for the last 21 years at American Martyrs School as yard supervisor and the milk lady. Elaine is survived by her spouse Joseph Scholz of Manhattan Beach; her son Joseph Scholz and wife Lori of Huntington Beach, son Charles Scholz of Redondo Beach, and daughter Mary Jane Vos and husband Robert of Redondo Beach and her brother Jack Kennevan and wife Jean of Cincinnati, Ohio. Elaine's grandchildren are Danielle Duchene and her husband Zach; Jonathan Vos; Allyson Scholz; Elaine Vos; Robert Vos and Melissa Scholz. Her great-grandchildren are Matthew and Natalia Duchene and her nieces are Joni Hickman and Shannon Kennevan and her nephew is Sean Kennevan. Elaine was preceded in death by her parents Daniel Kennevan and Ana May; foster mother Jane and ; her older brothers Bill, Tim, and Robert Kennevan. The Memorial Mass will be held at American Martyrs Catholic Church on Saturday, June 20, 2015 at 1:00pm with the reception to follow at American Martyrs School. Committal service will be on Monday, June 22, 2015, 10:00am at Pacific Crest Cemetery.