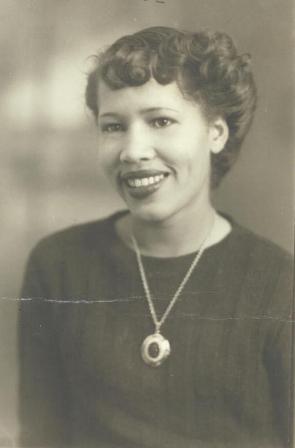 Edwina Fuller ("Sister" to family, but "Momma" to us) was born on August 20th 1917 in a little town named, Rockdale Texas. She was the second "Yellow Rose of Texas" born out of the union of Edgar and Lolita Jones. The newborn was admired for her dimples, perfect fingers and feet, but nothing seems to strike the memory more than the wonderful smile she retained throughout her life. In the midst of all the excitement over Edwina's birth, her father, Edgar, dropped a bombshell by giving his second daughter the same name he would have given a boy, "Edwin." Edwina's father had wanted a boy, not a baby girl, the story goes. It was some years later that our mother added an "a" at the end of "Edwin" creating the beautiful feminine name, "Edwina." Shortly after Edwina's birth, the Jones family nicknamed her "Sister" because she was Julia's little sister, the first "Yellow Rose of Texas." Indeed, to this very day, her relatives call her "Sister." The Jones' family packed their bags and moved to California in the early 1920's. Sometime later, Edwina's mother, Lolita, divorced Edgar and married Happy Johnson. Edwina was very popular in high school and was voted class president of Jefferson High. She was also an honor student with top grades. A family friend was shocked when he discovered that Mom could hold a conversation in Spanish and French. When asked "Where did she learn Spanish and French?" She replied, "In high school." In 1935, Happy Johnson (Mom's step father) and his band "The Five Jives" were commissioned to perform on a cruise liner going to Asia with a stop in Hawaii. At 94, our mother, Edwina, still talked about this cruise and all the people she met. Yes, her memory was sharp at 94. She spoke about the dancing, the great food, and the hospitality of the Chinese people. She reminisced on Hawaii and how beautiful the islands were in 1935. It was an experience of a life time for Edwina and her family. After returning from the cruise, Edwina married Thelsey Fuller in 1937. Out of this union came five children, Carol Ritchey, Sandra Arnold, Robert Fuller, Doris Fuller and Steven Fuller and a host of grandchildren and great grandchildren. She remained legally married to Thelsey Fuller although separated in late October or early November in 1968, until death. In 2008, her estranged husband, Thelsey Fuller came to stay with us for a little while, and they would sit in the back room holding hands and Mom would make him eat. Dad would always give her his favorite response, "You're the boss." This statement would always be followed with a laugh from him. He still loved her even after all those years of separation. In her later years, Edwina resided with her son, Steven Fuller and great grandson, Quentin Hadnott and Godson, Darnell Thomas. During this time, she was unconditionally loved and cared for around the clock. Steven purchased her a Maltese puppy who she named "Snowflake." This dog would eventually get lost only to be found a month later after being on TV, radio and in the newspaper. After that, Mom would not go anywhere without her puppy, Snowflake. Quality time included weekend trips to numerous museums in Los Angeles and Pasadena. She loved the flower gardens at the Huntington Museum in Pasadena and at the Exposition Park Museum in Los Angeles. Our presence at Marina del Rey's Fisherman's Wharf live music on Saturday and Sunday was almost a weekly event. On one occasion, we even put her on a boat to cruise around the Marina. She absolutely loved it. In short, we had fun with Mom and she had fun with us. In addition to attending the events at the Marina, Edwina loved riding up the coast to look at the ocean from Pacific Coast Highway. She wanted to go to the Observatory in Griffin Park - and we went there too. She had capacity for life and an appreciation for her inner circle of loved ones. A live cowboy band showed up on her birthday to perform and sing. I can still remember her smile and clapping her hands to the rhythm. Edwina loved music and would sing along with Aretha Franklin's "You Make Me Feel Like a Natural Woman." Another favorite was "I Lost My Thrill on Blueberry Hill" by Fats Domino. It was such a joy to hear her sing, however, off key. She was a blessing to me and all in my household - and will be missed greatly. Living a strong and proud life, rich in wisdom and beauty, filled with humor, Edwina found peace in forgiving. She grabbed my hand one day and told me that I "must forgive" and voiced her belief in John 3:16 "For God so loved the world that he gave his one and only son that whoever believes in him shall not perish but have eternal life." Edwina Fuller was preceded in death by her husband, Thelsey L. Fuller; grandson, David Stewart; her mother, Lolita Johnson (Mama Jones); and father, Edgar Jones; stepfather, Happy Johnson; sister, Julia Rollins; niece, JoAnn Gago. Edwina Fuller leaves to mourn her death her constant companion, Snowflake; 5 children, 17 grandchildren and a host of great grandchildren.