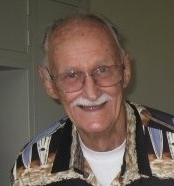 Edward R. Buckels Edward Robert Buckles was born on Oct 21, 1929 at Old Torrance Memorial Hospital to Marguerite and William Buckels. Know to his family and friends as Buckles, he passed away on Dec 21, 2015 at the age of eighty-six. Buckles grew up playing on the beach and helping his mom run a popcorn stand on the Redondo Beach Monstad Pier. He graduated from Redondo Beach Union High School in 1947 and developed a love of cars and motorcycles which quickly evolved into a passion for racing. He became a member of the Prospectors Motorcycle Club and participated in multiple races in the Mojave Desert, Nail Flats, Catalina Island and other local courses. His wife, son, and two daughters composed his cheering section at every race. Edward Buckels was also the proud employee of American Standard, in Torrance, for 33 years. Edward met his wife, Rita McDougall, in 1952 and was happily married for sixty-four years. He is survived by his wife and their three children: Paula Wright, Teresa Appelgate, and Eddie Buckels. He was also blessed with his six grandchildren and three great-grandchildren: Carla Dupin de Saint Cyr, Chelsea Williams, Ashley and Steven Wright, Catlyn and Siga Buck Appelgate, Jordan Howell, and Julia and Giana Dupin de Saint Cyr. His love for his grandchildren was unconditional and he was always their number one sports fan. Edward Buckels converted to Catholicism and proudly attended 5:30 Mass every Saturday at St James Church in Redondo Beach for over 40 years. Services for Edward Buckels will be held on Saturday, December 26, 2015. Mass will begin at 10:00 a.m. at St. James Catholic Church in Redondo Beach. After Mass, a celebration of his life will be held at Rice Mortuary at 5310 Torrance Blvd. In lieu of flowers, please make a donation to any animal rescue of your choice in his name.