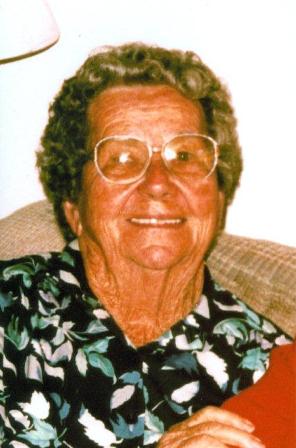 Edna Lucille Johnson, an 11 year resident of Lawndale, passed away on Monday, May 7, 2012. Born in Lennox, CA, Edna was 85 when she died. Edna grew up in Paso Robles, CA and attended grade school and high school there. She ran her own cafe there for a year after World War II. She was a cook, a waitress, a theater usher, and candy maker in her young life. She moved to Manhattan Beach, CA in 1949 and worked at Metlox Pottery. Her last employment was with Chemical Milling, making early printed circuit boards in the early sixties. After retirement Edna moved to Anza, CA with her husband, Okey Johnson and continued living in Anza after Okey passed. She returned to Lawndale in 2000. She liked collecting antiques, loved walking every day, and never missed a chance to go to a casino with her family. She prized her family above all else and especially enjoyed her grandchildren. Edna was a wonderful person and will be dearly missed by all who knew her and loved her. Edna is survived by son, James Johnson of Lawndale, CA and daughter, Beverly Rhoden of Ventura, CA. She was preceded in death by father, Ernest Register and mother, Jessie Register. The Memorial Service will be held at Rice Mortuary on Friday May 18 at 5:30 pm with a reception following in the Lighthouse Reception Room until 8:30 pm. Burial will be at San Jacinto Valley Cemetery.