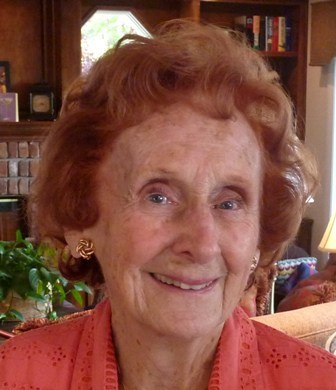 Edith Martha Smith (nee d'Entremont) 14 April 1916 - 4 February 2015 Edith, a 35 year resident of Palos Verdes, died peacefully on February 4, as she was nearing her 99th birthday. She was born in Boston, MA, and was preceded in death by her husband of 68 years, William Robert Smith, Lt. Colonel USAF, professor of accounting at the University of Southern California. She leaves behind four children, Bill, Kevin, Gary, and Vicki; five grandchildren and five great-grandchildren. Edith was a volunteer at Little Company of Mary Hospital from 1982 to 2009 to which she donated over 8400 hours. Among many interests, she particularly enjoyed reading, bowling, traveling, and football (USC Trojans and the San Diego Chargers). She was forever enthusiastic about learning new things and having new experiences, and was always reaching out a helping hand to friends and family. A Funeral Mass will be celebrated at St. John Fisher Catholic Church at 10:00AM on Wednesday, February 25 followed by a reception at the church. Interment will be at Riverside National Cemetery. In lieu of flowers, donations may be made to Little Company of Mary Hospital.