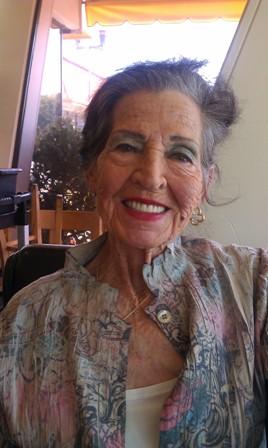 Doris Aleen Peters, "D.P.", 83, of Redondo Beach, California, died of natural causes in her home on April 19. Doris, a successful businesswoman and much loved wife, sister, mother, aunt, grandmother, and great grandmother was born on August 1, 1928 to William and Nova Mercer in Hobart, Oklahoma.She was the oldest of eight children and was adored by her three sisters and four brothers. She and her family moved to California in 1941. In 1947 Doris married Paul Bashaw Sr. and together they had three children. In 1963 she married Captain Roy James Peters and the two of them moved to Redondo Beach and built a family-business and life together. Doris and Roy Peters were passionate companions and they are both waterfront legends in Southern California Sport Fishing. Together they owned and operated the sport fishing vessel, "The City of Redondo" from 1976 to 2010. Captain Rick Oefinger of Marina Del Rey Sport Fishing wrote of "D.P." upon hearing of her death: "Doris Peters, chief galley girl and wife of Roy Peters … known to tens of thousands of fishermen, feared by dozens of pinheads, deckhands, and future captains, was a legend in her own time and her passing sadly brings to a close another piece of Southern California Sport Fishing history." Doris was a devoted wife, sister, mother, aunt, grandmother, great-grandmother, and friend to many. She is survived by her husband of 49 years, Roy James Peters; three children: Christine Bashaw-Coleman, Debra Bashaw-Pelsma, and Paul Bashaw Jr.; three step-children: Debby Peters-Nolette, Jeannie Peters-Pesner (Barry Pesner), and Jimmy Ray Peters; her sister Linda Cornelson and her brother Richard Mercer; five grandchildren: Richard Jesswein (Jennifer Jesswein), Erin Jesswein (Valerie Jesswein), Lisa Bashaw, Matthew Bashaw, and Jared Coleman; and five great-grandchildren: Cody Jesswein, Nova Jesswein, Tyler Jesswein, Zane Jesswein, and Jaymirae Coleman. A public viewing will be held on Friday, April 27 from 2:00-3:30 p.m. at Rice Chapel and Mortuary (5310 Torrance Blvd., Torrance, CA 90503) followed by a Memorial Service at 3:30 p.m. The family asks that in lieu of flowers, please make a donation to the charity of your choice in memory of D.P.