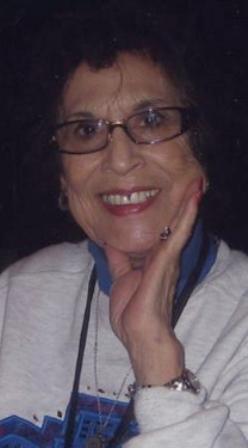 Dora Nelle Sanchez, a 58 year resident off Gardena, passed away on August 28, 2012. Born in Alamosa CO, Dora was 89 when she died. Dora graduated from Mt St. Scholastica College in Kansas with a degree in English. She began her career working for the LAPD and then moved to Gardena and worked for 40 years for the City of Gardena in various secretarial positions. She was a member of the Gardena Elks #1919 and a member of the Gardena Emblem club. She was a crossword puzzle enthusiast, a fan of Englebert Humperdink and Rod Stewart. She enjoyed bus trips to Pechanga and Laughlin. She was also a world traveler who toured throughout Mexico, Spain, Portugal, Paris and Rome. Dora is survived by daughter Ledra Sanchez of Bellflower CA; son Lee Sanchez of Gardena, CA; and grandchildren Alex and Marcella Sanchez. She was preceded in death by her husband Lee Sanchez and by parents, Augustina and Epifanio Jaramillo. She is also survived by nephew Tom Chavez and nieces Paula (Chavez) Hudson, Pamela (Chavez), Angela (Chavez) Serafin, Monica (Chavez) Gelbaum, Michele (Chavez) Denise (Chavez) Cohens. Kathryn Jaramillo, Shirley (Jaramillo) King, along with numerous grand nieces and nephews. The Rosary will be held at St. Anthony of Padua in Gardena on Sunday, September 2, 2012 at 7:00pm. The Mass will be celebrated on Tuesday, September 4, 2012 at 10:00 am. Burial will follow at Pacific Crest Cemetery in Redondo Beach. A reception will be held at the Gardena Elks Lodge in Gardena.