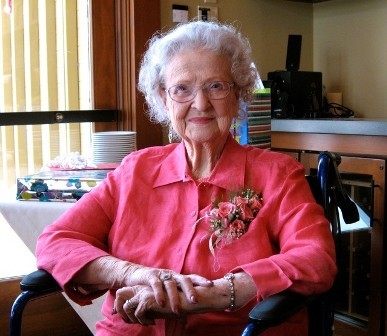 Donna Willyne Berry-Bailey Born February 26, 1921 in Idaho Falls, Idaho Passed March 14, 2015 in Bend, Oregon Donna was born in Idaho Falls, daughter to Franklin Berry and Anita Ashcraft-Berry. She moved to Redondo Beach in 1922 where she was raised. She attended Redondo High School, and joined the First United Methodist Church in Redondo Beach. She began singing at the age of three and sang on two radio stations in 1937 and 1938. Music played a major part of her life. She was always willing to share her voice at any time. One of her happiest and most satisfying times, she wrote, was when she was joined by her sisters, Jean and Diane, and they became the Berry Sisters. They gave credit to their parents (both musicians) for keeping music alive for them. Donna also sang with the Orson Reynard Orchestra at the Naval Officers' Club in Long Beach for many years, and was a soloist in the church choir. On June 11, 1948 she married Norman Lees Bailey in Coeur d'Alene, Idaho. (They met at the Coconut Grove where she attended the tea dances of the Freddy Martin Orchestra, and Norman played the trumpet). Norman later joined the Lawrence Welk Orchestra until his retirement. Donna and Norman had two daughters, Cynthia (Patrick Wilson) and Janice (Robert Hopkins). She had two grandchildren, Rebekah (Keith Fields) and Stefani (Donnie Emerson); and four great-grandchildren, Kaitlyn, Zachary, Andrew, and Khyler Emerson. She was also blessed with what she called her "bonus" grandchildren, Michael Wilson (Carrie) and Jennifer Moxley (Chad); and four "bonus" great-grandchildren, Courttney and Christopher Moxley, and Matthew and Joshua Wilson. In addition to two sisters, Jean and Diane, she had three nieces - Kris, Cheryl, and Patti Jo; and one nephew, Michael; and many, many cousins. She lived in Southern California until 1998, when she moved to live with daughter Cindi in Texas and New Mexico. In 2003 she moved to Bend, Oregon to live with daughter Jann until her passing. She had just turned 94 years of age. In lieu of flowers, the family wishes that donations be made to your favorite charity.