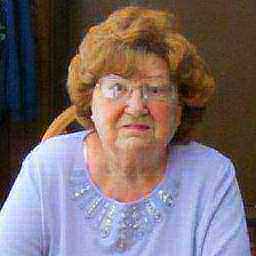 Donna Nielsen Born April 12, 1924 Died January 9, 2012 Our cherished mother, grandmother, great-grandmother, sister and treasured friend of many years passed away peacefully on January 9, 2012 at her longtime home in Torrance, CA. She was born on April 12, 1924 in Manley, Iowa where she was the second youngest of seven children. Donna met her husband of more than fifty years, Robert J. Nielsen, in St. Paul, Minnesota during WWII. There they married and had two children, Mary Kay (Bills) and Jim. In 1953, the family made a difficult decision to leave their extended family in Minnesota to be part of the post war California boom. Donna proudly retired as a planner from North American Aviation (Boeing) in 1985 after 33 years of service. She was most proud of her work on the NASA Space Shuttle including the meeting of our astronauts. She was a proud lifetime member of the U.A.W. and was regular sight at their monthly union meetings in Downey. She especially loved spending time with her family and neighbors, playing bingo, twice a week at the Carson Jolly Senior Citizen Club. Every Saturday she joined fellow parishioners in celebrating the 5:30 Mass at St. Catherine of Laboure. Her daughter and son would like to thank Dr. Paul Brown and his staff for their compassionate care during her arduous battle with Lung cancer. She is preceded in death by her loving husband Bob; sisters Lolly, Millie and Mary; and brother Eli Grubich. She is survived by; sisters Birds Elliott and Cathy Palmesino; daughter Mary (Joe) Bills; son Jim (Tina); grandchildren Jim Jr. (Kim), Geoff (Michelle), Kate (Dan) Krause, Ryan Seitz, Zack (Larissa) Seitz, Suzanne (Shawn) Goodfellow, and Alan Bills; and 12 great grandchildren. A memorial Mass will be held Friday, January 13, 2012 at St. Catherine Laboure Church at 10:00 am, followed by a reception in the church hall. Our mother will be interned with her beloved husband Bob at Riverside National Veteran's Cemetery in a private family ceremony.