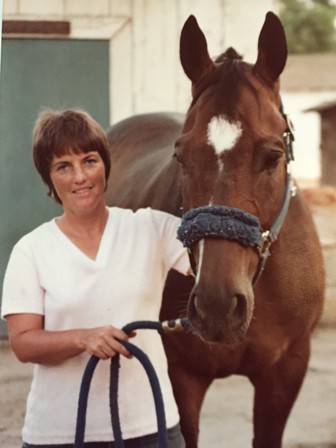 Donna Louise Naylor "The best we can do when we lose someone is to keep loving them. For though they are gone from our sight, they can never be gone from our hearts and our memories. The way to ease our sorrow is not to forget but to remember them." Donna, your words ring true. We shall miss you, but you will always be with us. Donna Naylor was born October 27, 1946 and passed away peacefully on November 15, 2015. She confronted breast cancer head on and inspired us with her fight, courage and optimism. Donna lived on the Palos Verdes Peninsula for almost fifty years and was a beacon in the equestrian community. She was born in Pennsylvania, grew up in New Jersey, and got hooked on horses after researching and writing a school report on the topic. Her love and passion for horses never wavered from that point forward. She was seventeen when she got her first horse and took him with her to Radford University where she was an English major. She was offered the opportunity to study at the Jane Marshall Dillon School of Junior Equitation in Vienna, Virginia, and seized it, never looking back. Donna was a major proponent of Mrs. Dillon's teachings her entire life. Proper horsemanship, empathy for the horse, and a strong work ethic were tenets of her method. Donna taught students at the Red Barn under Jane Souther, and the Portuguese Bend Riding Club, before moving to Palos Verdes Stables in the late 1980's as a riding instructor in both hunter/ jumpers and dressage. She had tremendous knowledge, was a gifted teacher, a highly regarded mentor, and a person of whom Mrs. Dillon would have been proud. Donna frequently commented on how fortunate she was to find a career that combined her three great passions: horses, teaching, and children. Many of Donna's students went on to become trainers in their own right-a legacy to her stewardship and far-reaching influence. Always friendly and kindhearted, Donna had a soft spot for animals. In recent years she adopted a cat, Sophia, who provided great amusement and was a faithful companion through thick and thin. Prior to that, Donna's love was Sofa, a rescue horse that until age eight, cowboyed around with no formal training. Donna nurtured and worked with Sofa, who went on to win both the American Horse Show Association and California Dressage Society Horse of the Year in 1992. This was a source of satisfaction and pride: they made a great team! Although Donna did not pursue writing as a career, it was in her blood. Family and friends treasure her poems written for special occasions, as well as her many musings on timely and meaningful topics. She would have been a blogger extraordinaire had she been born a decade later. She had a gift of gab and made friends wherever she went. Donna is preceded in death by Sofa, Goodtime Johnny, Gal, and Sandman, and additionally by her parents Eleanor and Kenneth Naylor, her sister Joanne Tompkins, and her brother-in-law John Duits. She leaves behind brothers Kenneth Naylor and his wife Karen of Rancho Palos Verdes and Craig Naylor of Costa Mesa, sister Sue Duits of Huntington Beach, brother-in-law Christopher Tompkins of Fayetteville, Arkansas, many loving nieces and nephews, and literally hundreds of devoted students and friends.