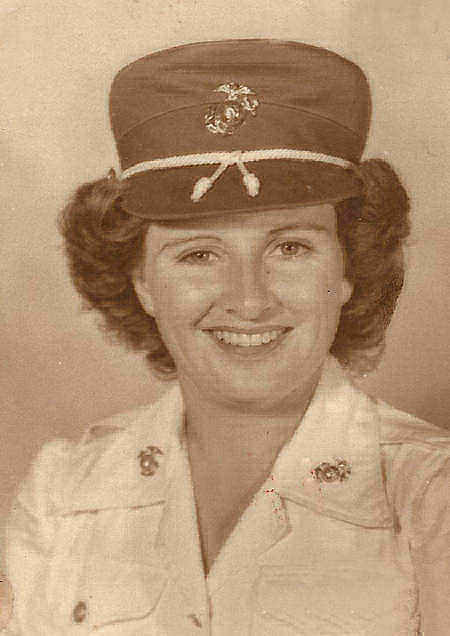 Donna Jean Brown (Lang) was born on January 15, 1922 in Red Bluff, CA and went to her heavenly reward on January 1, 2013. While in high school Donna met a handsome young man named Virgil Brown. At the onset of WWII, Donna joined the US Marines and her young beau, Virgil, joined the Air force. Donna and Virgil's love letters saw them through the war and at its end; they married on March 11, 1945 and began their 53 year long marriage. After both Donna and Virgil were honorably discharged from their respective services, they moved to Los Angeles, CA and then to Hawthorne where they bought their first and only home. There they raised their four children, Sherri (Myers), Tim Brown, Melody (Magana) and James Brown. Donna was a kind and thoughtful person and a devoted wife and mother who always put her family first. She was wonderfully creative and loved to use her free time working on her many projects. She also had a green thumb and was very proud of her yard and greenhouse. She particularly loved her orchids, cactus flowers and violets. Donna was very involved in the Degree of Pocahontas Lodge, a fraternal, patriot organization for which she was a 58 year member. Donna loved to camp with her family. She and Virgil had great fun during their many family adventures and created wonderful memories for their kids and later, their grandchildren. In 1967 Donna went to work for McDonald Douglas where she worked for 10 years then later went on to do bookkeeping for a car rental agency. Donna lost the love of her life in 1998 but it gives her family great peace knowing they are now reunited. Donna leaves a great legacy for her 4 children, 10 grandchildren and 15 great-grandchildren. Her life is a celebration of love, commitment and courage. We all love her so much and will miss her deeply but we know every time we think of her, she will be in our hearts. Two smiling eyes are sleeping, Two busy hands are still. The one we love so deeply Is resting at God's will. May she always walk in sunshine, God's love around her glow. For all the happiness she gave us, Only a few will ever know. It broke our hearts to lose her But she did not go alone. For part of us went with her The day God called her home.