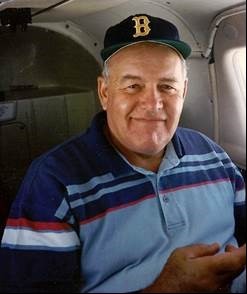 Donald R. Davis Donald R. Davis 86, died peacefully on October 11, 2016. Don was born on November 27, 1929 in Los Angeles and was the son of Lynn Walter Davis and Marion Bosche Davis. Don spent his early life in the South Bay. He attended St. Cross Church in Hermosa Beach and Redondo Union High School (class of 1948) where he was an outstanding athlete both on the basketball court and on the football field. Don attended and played football at El Camino College, transferred to UCLA and became an avid Bruins supporter. At UCLA he affiliated with Phi Gamma Delta (FIJI) Fraternity. Following his years at UCLA, Don entered the US Army in 1955. He trained at Fort Ord before serving in Kyoto, Japan. While in Japan, his job was to intercept foreign military codes. Upon completing his military service, Don returned to Los Angeles and followed in his father's footsteps and entered the Insurance Industry. He began at the Harbor Insurance Company and then transitioned to Swett & Crawford. He had an expertise in placing insurance for major U.S. Railroads including Union Pacific, Denver and Rio Grande. He traveled often to the U.K. to conduct business with Lloyd's of London. In 1970 Don founded Worldwide Facilities with two partners. He created a great corporate culture and as a result of his talent, hard work, generosity and professionalism the company has grown to be one of the largest and most successful firms of its type in the U.S. Don mentored some of his nieces and nephews into the insurance industry who are now working as the next generation of Worldwide Facilities and continuing to build on his legacy. Don loved sports both as a participant and a spectator. He was a member of Wilshire Country Club and Los Angeles Athletic Club. Don enjoyed golf, hunting and fishing. He was an avid Dodger Fan and was passionate about his UCLA Bruins. His season tickets for Basketball were located directly behind John Wooden in Pauley Pavilion and on the 50 yard line at the Rose Bowl. Don shared his many passions, traveling, attending sports events, fishing, hunting, and enjoying good food and wine, with his nieces and nephews. Don is survived by his brothers, Lynn Davis and Charles Davis and his sister, Barbara (Morgan Jr) Moore. He is the beloved uncle to nine nieces and nephews: Karen (Scott) Stuckman, Lori (Sean) Hunter, Morgan (Shari) Moore III, Davis (Diane) Moore, Debbie (Stan) Newby, Denise Slater, Keith Davis, Walter Davis and Shawn (Michael) Waresh; 17 great-nieces and nephews: Ashleigh (Ryan) Krauch, Eric (McKenzie) Stuckman, Matthew Hunter, Paige Hunter, Kelsey Moore, Lindsay Moore, Conner Moore, Megan Moore, Davis Moore, Renee Moore, Natalie Slater, Brittney Slater, Tyler Davis, Bradley Davis, Christopher Davis, Jordon Waresh and Sienna Waresh and five great grand-nieces and nephews: McKenzie Krauch, Carter Krauch, Cassidy Krauch, Grayson Krauch and Charles Stuckman. The family would like to express their gratitude to Belmont Village, Torrance Memorial Hospital, Providence Trinity Hospice for their care in his final days. In lieu of flowers, donations can be made in his name to the Prostate Cancer Foundation or to the UCLA Wooden Athletic Fund. A public service will be held at St. Cross Episcopal Church located at 1818 Monterey Road, Hermosa Beach, CA on November 1, 2016 at 3:00 PM.