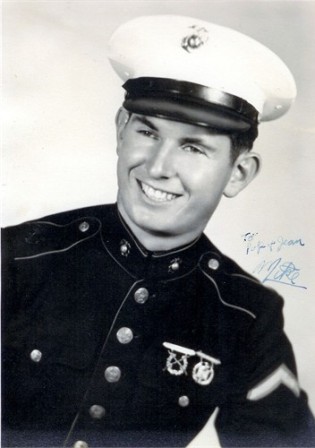 Donald Michael Morrison was born January 3rd, 1931 and departed from this life and entered into eternal life with Jesus Christ on September 2nd, 2013. During his youth and teenage years Donald participated in athletics and he had a fairly successful prep football high school career at Washington High School in Los Angeles, California where he was a member of the undefeated 1947 Los Angeles City Champions. While he was still in high school he joined the United States Marine Corps Reserve, after graduating from Washington High, he enrolled at Pepperdine University and was the quarterback for the freshman football team. On July 24th, 1950 Donald's reserve Marine Corps unit was activated and they deployed to Korea. As a 19 year old man, Donald was a platoon leader in the 1st Battalion, 1st Marine Division: Heavy Machine Guns Unit. He was in charge of 15 U.S. Marines armed with their service rifles and two .50 caliber heavy machine guns. His Marine Division fought in the battle of the Chosin Reservoir. After returning from Korea, Donald was honorably discharged from the U.S. Marines at the rank of Staff Sergeant. He returned to college and graduated with a B.S. in Physical Education from Pepperdine University in 1956. He began working as a middle school teacher for a few years and then pursued a career in law enforcement. Donald served as a police officer with the Beverly Hills Police Department and the Torrance Police Department from 1960 to 1968 before resigning after accepting a teaching position at Redondo Union High School. Donald enrolled in graduate school and obtained a Master's Degree in Education with an emphasis on Marine Biology and Physical Science from Pepperdine University. He also did extensive graduate work at UCLA, UCI, UCSB, Cal State Fullerton, and USC in the fields of Education, Marine Biology/ Marine Science, Ocean Engineering, and Marine Ecology to enhance his knowledge for teaching his students at Redondo High School. Donald taught physical education, science, biology, oceanography and photography at Redondo Union High School from February 1968 until his retirement on June 30th, 2000. Including his time as a middle school teacher, Donald taught for a combined total of 36 years and received his Life Teaching Credential, General Secondary during his career as a teacher. In addition to his impressive resume as a U.S. Marine, Police Officer and Teacher, Donald was also an avid scuba diver. In fact the ocean was almost like a second home to him. He began scuba diving in 1953 and achieved certifications as a Los Angeles County Underwater Instructor/ with an advanced scuba instructor rating; YMCA Rescue and Accident Management Instructor; NAUI Instructor for Deep Dive Rescues and Wrecks; He was a Certified American Red Cross CPR/First Aid Instructor; Certification for underwater photography/cinematography; he was certified as a Hyperbaric Chamber Operator for the Catalina Island Hyperbaric Chamber through the University of Southern California where he served as a crew member from 1980-1990; He also received a U.S Navy scuba diving certification to a depth of 200 feet. He was also certified to repair every piece of scuba equipment you could think of. He used his knowledge and skills in scuba diving to help people who were injured in diving accidents and to teach them how to scuba dive; he served on the board of directors for the Los Angeles County Underwater Instructors Association for 4 terms and was a member of the L.A. County Underwater Safety Committee. He developed the Los Angeles County Intermediate Diver Program and the "Junior Frogman" Program and helped develop the first advanced diver program in L.A. County. He also developed Pepperdine University's Scuba Program and originated the King Harbor Cleanup in 1982 with Redondo High School's Scuba Explorers Club. Donald also participated in scientific diving/photography work for the University of Southern California from 1970-1990. Donald is survived by his wife of 53 years, Frances (Allen); daughter Michelle; sons Kenneth (Aracely), Jack (Laurel) and Benjamin (Dawn), and 5 grandchildren - Ian, Kaitlyn, Carson, Michael & Carlee, and his brother John Patrick Morrison (Marlene) and many other extended family members and friends. His private memorial service will be held on the boat Voyager out of King Harbor in Redondo Beach, Ca. On September 29th at 10:30 am. His ashes will be scattered back into the ocean where he spent thousands of hours scuba diving and teaching others how to scuba dive.