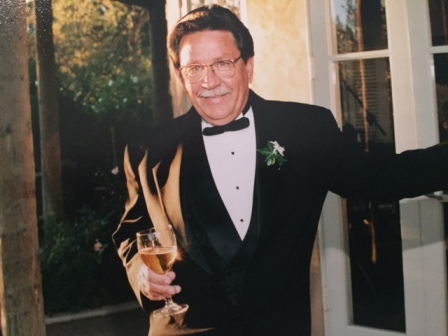 Donald "Punky" Franklin Mercer, of Torrance, CA passed away peacefully in his home on August 30, 2016 after a long battle with cancer. He was 74 years old. Don was born on January 31, 1942 in Los Angeles County to Donald and Beatrice Mercer. He married Anita Holliday in 1963, and the pair moved to Torrance, CA where they raised two children and remained until Don's death. In his teenage years, Don was a talented baseball player and all-around athlete. He graduated from Leuzinger High School in 1959 and began a career with Burns Typesetting as a typesetter. He later joined Redondo Beach Unified School District's maintenance team as a groundsman and plumber. Don retired in 2005 after celebrating 23 years with the district. In retirement, Don lived out his passion for golf on the golf course and in his work as a salesman at Plaza Golf in Torrance, CA. Don was a devoted husband, brother, father, and grandfather who loved completely and unconditionally. He was well respected among his peers and considered a loyal and selfless friend; he never refused an opportunity to share his expertise or extend a helping hand. Don was a man whose generosity had no limits. His grandchildren will lovingly remember him as "Pop Pop" and "Poppie," a devoted grandfather who supported them in all their activities and took great pride in their many accomplishments. Don is survived by his wife, Anita; his son Jeffrey and his wife Cheri of Simi Valley, CA; his daughter Laureen and her husband Michael of Belmont, CA; his five grandchildren, Tyler, Hannah, Aidan, Brooklyn, and Kaelin; and his sister JoAnn Franchimone of La Habra, CA. He is preceded in death by his parents, Donald and Beatrice Mercer of Los Alamitos; and his sister, Beverly Ortega of Torrance, CA. A funeral is scheduled for 2:00 p.m. at Rice Mortuary in Torrance, CA, with a reception immediately following. All are welcome to attend this celebration of Don's life. In lieu of flowers, his family requests a donation in Don's name to American Cancer Society or a charity of your choice. Fill not your hearts with pain and sorrow, But remember me in every tomorrow. Remember the joy, the laughter, the smile, I've only gone to rest a little while. Although my leaving causes pain and grief, My going has eased my hurt and given me relief. So, dry your eyes and remember me. Not as I am now, but as I used to be. I will remember you and look on with a smile. Understand, in your hearts, I've only gone to rest a little while. As long as I have the love of each of you, I can live my life in the hearts of all of you.