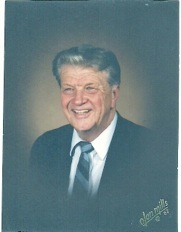 Donald John (Jack) Armstrong of Redondo Beach died peacefully on May 22, 2013. He was born in Atlantic, Iowa on October 21, 1923 and was the only child of Mabel and A.W. (Wayne) Armstrong who preceded him in death. Jack was well known for his personality and spent his life selling himself and the Company, Control Switches, Inc. which he controlled for the last half century. He is survived by his wife of 61 years, Kathryn; his six children: Patricia Campbell, Judy Steward, Susi Moore, Robert Armstrong, Peggy Turner and Jane Armstrong; his son-in-laws Dean Steward, Tom Moore and Scott Turner; eleven grandchildren and two step-grandchildren. Jack was a veteran of WWII and served with the 307 1st Quartermaster Refrigeration Company in Europe, the Philippines and Japan until the war ended. He spent a semester at Stanford University and worked for RJ Reynolds Tobacco Company for many years until he decided to establish his own business in California with his father-in-law. They established the Ashe-Armstrong Company and finally a Corporation called Control Switches, Inc. based in Long Beach, California. Jack took over leadership of the Corporation with help of three of his daughters. His daughters maintain the business at this time and will continue to be importers and exporters in the future. Jack was baptized and confirmed in the Lutheran Church Missouri Synod and has attended Immanuel Lutheran Church in Redondo Beach since 1955 but his family remained members of the Roman Catholic Church. His family has always been a showplace on how different religions can survive and grow. It is a true Christian family and he always considered the Catholic priests at schools and churches as his true friends. Funeral Services will be conducted at Immanuel Lutheran Church, Redondo Beach on Monday, May 27th at 11:00 am and burial will be a private service held at Green Hills Memorial Park in Rancho Palos Verdes on Tuesday, May 28th. His favorite prayers always ended with "and may God Bless Martin Luther" which was repeated by all his Catholic family and friends. In lieu of flowers, please make a donation to your favorite charity in the name of "Jack" Armstrong.