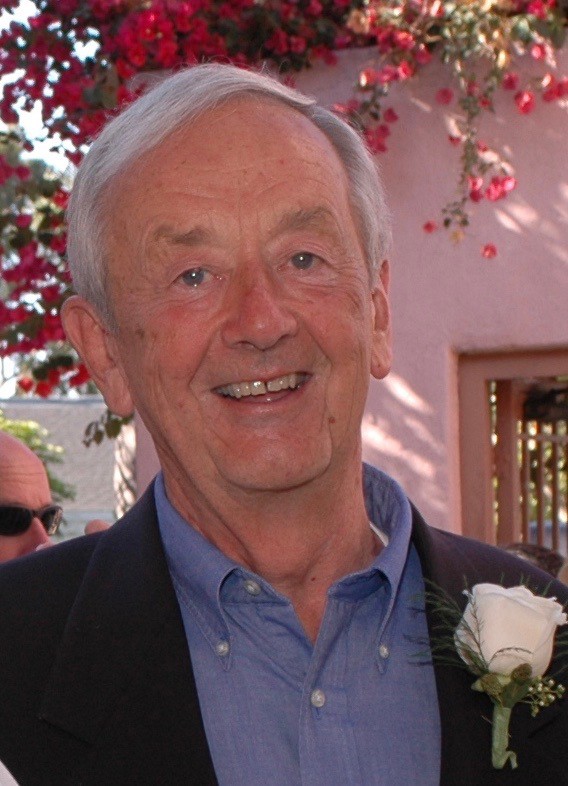 Donald James Holscher was born on May 4, 1930 in Dubuque, Iowa to Albert Holscher and Leona Brunken Holscher. Don was an only child. He went to grade school at Nativity School and then Loras Academy, an all-boys military high school run by priests and retired military officers. Dad was active at Loras Academy and was on the rifle team, the tennis team, and captain of the military band. Dad loved to recount how he also joined the debate team after the principal gave him the choice of debating or cleaning rifles for a month after school. Dad worked all sorts of odd jobs in high school, from repairing the railroad, driving an ambulance, and working in a butcher’s shop. Dad was also an eagle scout. Don then went to Iowa State College in Ames, Iowa where he graduated in 1952 with a B.S. in Electrical Engineering. Dad was selected for the Hughes Masters Fellowship program at UCLA. He left Ames, Iowa in 1952 and headed to California to work at Hughes and to study at UCLA. While Don loved his family and friends in Iowa, he never looked back (and never ate corn again). Don graduated from UCLA in 1954 with a Master’s degree in Engineering. In 1954, Dad met the love of his life, Maureen Splaine, at the UCLA Catholic Newman Center. Dad courted mom and asked his Irish rose to marry him during a Newman Center trip to Yosemite. Don and Maureen were married on June 25, 1955 at Good Shepard Church in Beverly Hills, CA. Dad would make sure to note that the reception was at the small house he and two of his classmates rented in Westwood. Don and Maureen settled in Playa Del Rey, CA where they raised their five children Donna, David, Mark, James and Matthew. Don, true to his military high school roots, led the Holscher family work crew every Saturday morning. He would line up his "#1 (and only daughter) followed by #1 through # 4 sons, and ensure that all household and yard tasks, including changing the oil on the cars, were completed by his children under his direction. Don's favorite pastimes were flying a single engine Cessna and sailing with his family to Catalina Island. Dad also loved flying glider planes in Tehachapi. Don had his pilot's license for 50 years. His family's first trips back to Iowa were aboard the single engine Cessna. With #1 daughter Donna as co-pilot looking over the maps to confirm he was on course, off we went. Don would then fly the family all the way to Rhode Island to join Maureen's family reunion. Great adventures for sure. Don also taught himself to sail and to windsurf, He loved nothing more than taking his family (and his beloved golden retriever Stosh) to Catalina. Don loved his Fairwind "Yacht Club" where he and his friends shared boats. At least a few times every year, Don would make the 7-hour sail from Marina Del Rey to Avalon or Isthmus on these small sailboats. Mom earned her sainthood on these "vacations" with the five kids and our dog. We filled our days with skin diving, fishing, windsurfing, and if we were good, and abalone burger at Rosie's on the pier. Dad loved having the family together on these special trips. Don also continued to devote himself to his work as an aerospace engineer at Hughes Aircraft in Culver City. Don spent his entire career at Hughes and loved his work. Don was awarded numerous patents for his work with infrared lasers as well as his work designing space satellites used by U.S. Intelligence Agencies. His teams developed the technology that enabled U.S. spy satellites to position themselves over foreign countries and take high-resolution photographs. Don finished his career as head of Hughes” Advanced Space Systems Group. But his kids remember him most for the job he did not take. When Donna and David were starting high school, Don was asked to take a dream job for an inventor at Hughes, to head up the Hughes technology laboratory in Santa Barbara, CA. Don said no. He just did not want to uproot his family from St. Anastasia and Loyola High School. Donald and Maureen were very active at St. Anastasia's parish where all five of their children went to school. Don helped lead the regular work crews who maintained the church and the school. Don and Maureen were regulars at the weekly masses and hosting parish parties. After Don retired from Hughes in 1989 he started his daily routine of riding his bike to 6:30 am mass at St A's. Don and Maureen, and their close friends the Healeys, Harrises, Wilkerson, Gutweillers, treasured their regular Saturday church and brunch dates; and they later visited the Italy and Europe together. After Don retired from Hughes he also began serving others. For more than 20 years, Don was a chaplain at the Los Angeles County Jail. Dad loved his ministry and said that these young men just needed someone to listen to them and pray for them. Don and Maureen were also chaplains at Camp Miller Detention Facility for juveniles in Malibu. Don also worked with Maureen at St. Margaret's Center in Inglewood caring for the homeless. Don and Maureen were blessed with sixteen grandchildren. "Pa" loved to take his grandkids swimming and out for adventures. And if their parents would let them, Pa would take them for a ride in his single engine Cessna. Don adored his "little one" Maureen during their sixty-one years of marriage, and he missed her terribly after Mom passed away in December 2016. Don was a man of his word and of great faith. We will miss his unwavering moral compass and devotion to his family.