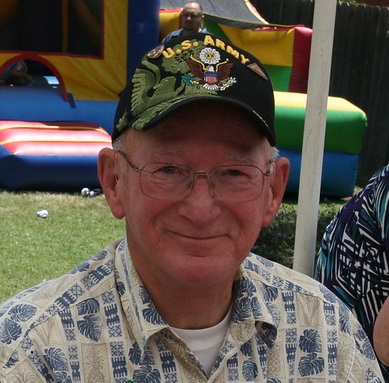 Donald (Don) Dean Hill, from Torrance, CA, passed away on Monday, March 26, 2018 at the age of 78. Don was born on July 3, 1939 in Alexandria, Minnesota to Ruth and Herschel Hill. He proudly served in the United States Army from 1959 to 1962, through which he had the opportunity to travel to Germany. After the military he worked at several companies culminating at the Chevron El Segundo Refinery where he worked for 23 years, until his retirement as a head operator in 1992. After his retirement Don took up several hobbies, including a love of needlepoint, which he learned from his wife, Evie. He also enjoyed trips with her up and down the California coast, including their favorite stop in Cambria, CA, and Europe. Back in Torrance, he enjoyed gardening and working on his house, and always enjoyed spending time with his family. One of his favorites pastimes was spending time with his pets, most recently with Gabby who enjoyed taking naps with him during the day. Over the past few years, he always looked forward to attending his grandnieces and grandnephew’s many concerts, open houses, and performances. Don will be remembered for his stories, willingness to lend a hand when needed, his love of Cuban coffee, his delicious black bean recipe, his patriotism (always wearing his army hat!), and his laugh. He will be missed by many. Don will be lovingly remembered by his wife of 47 years, Evie Hill, his sister-in-law and brother-in-law Estela and Arturo Bueno, his nieces, Estela (William) Tieman, Alina (Gregory) Nadsady, Elisa (Bradley) Reynolds, his grandnephew, Aidan, grandnieces, Maria, Isabella, Lillian, Alyssa, and Emily, his children from Germany, Ruthie, Patricia, Elizabeth, and Steven, and many grandchildren, and great-grandchildren. Viewing for Don will be on Monday, April 2nd from 5:00-9:00 pm at Rice Mortuary, 5310 Torrance Blvd., Torrance, CA 90503. The Rosary will be at 7:00 pm. Funeral Mass on Tuesday, April 3 at 10:00 am. at Our Lady of Guadalupe Catholic Church at 320 Massey Street, Hermosa Beach. Burial at Holy Cross Cemetery, 5835 W. Slauson Avenue, Culver City immediately following Mass. In lieu of flowers we request that donations be made to: The Diabetes Research and Wellness Foundation: www.diabeteswellness.net/donate or The American Heart Association