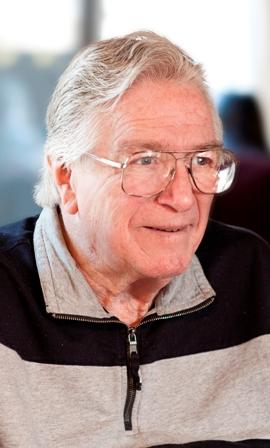 Donald B. Merryman, a beloved husband, father, grandfather, and soon to be great-grandfather, passed away on Tuesday, January 31, 2012 in his home surrounded by his loving family at the age of 81. He was born on November 20, 1930 in Los Angeles, CA. He is survived by Darleen, his beloved wife of 57 years, his three sons, Dennis, Don (Lisa), and Doug. Also surviving are his grandchildren, Ryan (Shannon), Ashley, and Bradley. Don enjoyed his life with Darleen, whom he married on May 14, 1955 in Los Angeles, CA. Together they raised their three boys in Manhattan Beach, a town where Don resided for 57 years. Don retired in 1989 after a loyal career working as an engineer at Hughes Aircraft Company.Don was a survivor of polio and cancer. As a young man hospitalized by his condition he came in contact with many children facing similar and worse challenges than his own. This experience fortified his bravery and compassion for others. Later in life, he was motivated to give back to the community primarily through his proud membership in the Masons of California fraternity where he dedicated many years to philanthropic efforts. Though blessed with countless wonderful memories, Don will be truly missed by his family and friends. He will always be remembered as a trusted source of wisdom, guidance and support who could be counted on in good times and bad. A memorial service for Donald Merryman will be held on Friday, February 17, 2012 at 11AM at White & Day, 3215 North Sepulveda Boulevard, Manhattan Beach, CA 90266.