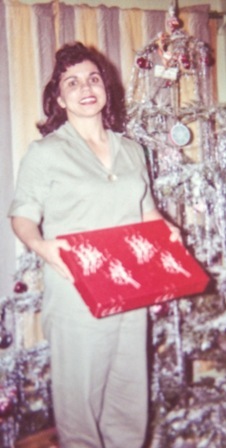 Dina Connie Geges (nee Vengel) October 19, 1928 - December 15, 2014 Dina Geges died peacefully in her home in Manhattan Beach, California on Monday, December 15, 2014, with her family at her bedside. She was 86 years old. Born on October 19, 1928, Dina was the youngest of seven children of Dimitrios and Angeliki Vagelatos, one of the pioneer Greek immigrant families to call Manhattan Beach and Los Angeles their home. Dina graduated from Redondo Union High School in 1946, and completed her Associate of Arts Degree, a feat not accomplished by many women of her generation, in 1948. While working in the family floral business, in 1952 she married the man who was her best friend and the love of her life for 64 years, Nicholas Geges. Together, they had four children and a successful liquor store business until their retirement in 1981. With Dina's astute business sense, they acquired various properties in the South Bay, and continued to work into their golden years managing them. Dina was preceded in death by her brothers George and Jerry in 1992; her sister Sophia in 1995 and sister Martha in 2009. Dina is survived by her sisters: Louise Sotiriou of Manhattan Beach, Amalia Ambatielos of Hermosa Beach; her husband Nicholas Geges of Manhattan Beach; her children Caliope Lavine of Redondo Beach, John Geges of Garner Valley, Demetra Johal of Pasadena, and Maria Pena of Oceanside, California; her beloved grandchildren Nicholas, Dimitri, David, Peter, Alethea, Ana, namesake Kostantino "Kosta", and Dominic; her great-grandson Nikolas, and many cousins, nephews and nieces. Trisagion services will be held at White and Day Colonial Mortuary, 901 Torrance Blvd., Redondo Beach, CA on Friday, December 19 at 7 pm. The Funeral will be held on Saturday December 20 at 11am at St. Katherine Greek Orthodox Church 722 Knob Hill Ave. Redondo Beach CA. Makaria luncheon at the Church Hall to follow interment.