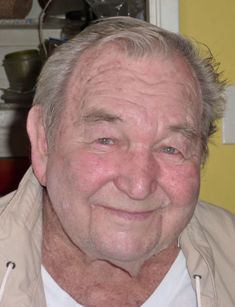 Dean Clyde Thurman, a 48 year resident of Torrance, CA passed away on Tuesday, May 28, 2013 in Fountain Valley, CA. Born in Artesia, CA, Dean was 88 when he died. Dean had served in the Army during WWII in the European campaign. Dean attended El Camino College and for a short time USC. Dean started his own business as a hardwood flooring contractor and later in his career specialized in gymnasium refinishing and line-striping. At one time Dean's handiwork could be witnessed at every high school gymnasium in the South Bay. Dean's passion was hunting and fishing and every year he spent the month of October in Utah with his best buddy hunting deer and fishing for trout. Dean and his wife, Shirley, were charter members of the Southwest Association for Retarded Children, which is now ARC. Dean is survived by his son, Larry Thurman of Torrance, CA, his daughter, Sherilyn Thurman of Huntington Beach, CA, and sister, Mae Tanksley of Moreno Valley, CA. He was preceded in death by his beloved wife, Shirley Thurman, in 2010, who he was married to for 65 years. A Graveside service will be held on Tuesday, June 4, 2013 at 11:00 am at Pacific Crest Cemetery in Redondo Beach. In lieu of flowers, donations may be made to the VFW.