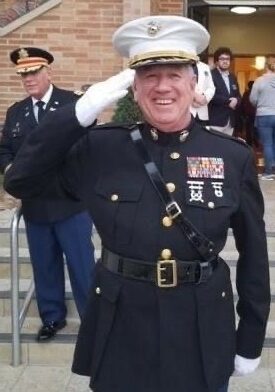 David Martin McCarthy was born in Brooklyn on January 17, 1958, to Lydia McCarthy (nee Drago) and Joseph McCarthy. His family moved to a nice suburban house in Valley Stream, Long Island, where he grew up.

David wanted to enlist in the Marine Corps after high school, but out of respect for his father’s wishes he attended C.W. Post College and earned a bachelor’s degree in Political Science and Criminal Justice. After graduation, he became a Police Officer in New York, where he was recognized for his outstanding police work. During this time, he earned a master’s degree in Criminal Justice and then left the police force to accept a Commission in the Marine Corps, where he served in both an active-duty capacity and the reserves for 28 years until retiring. During this time, David served in Operation Desert Shield, Operation Desert Storm, Operation Enduring Freedom and Operation Iraqi Freedom. David received a Bronze Star Medal for his brave actions in Iraq, where he was wounded in action during a rocket attack.

After completing active-duty service, David earned his Juris Doctorate from Fordham University School of Law and passed the New York State Bar. David began his law career as a Public Finance Attorney for a Wall Street law firm, where he worked for four years until being recruited by a large downtown Los Angeles law firm. The move to California allowed him to be with his son, Joseph Daniel McCarthy, from a prior marriage. Joseph is married to Shanee McCarthy (nee Cohen), and they have two daughters, Michal (16 months old) and Avigail (three months old).

David left private law practice to become a Deputy City Attorney/Prosecutor and married Carey Elliott and together they raised twin sons, Connor Elliott McCarthy and Trevor Elliott McCarthy (21 years old). Connor is attending Loyola Marymount University pursuing a master’s degree in Education, and Trevor is attending UCLA pursuing pre-med. David served as Deputy City Attorney/Prosecutor for 15 years until he accepted an early retirement. To be near his dying Mother, he accepted a position as the Chief Legal Instructor for the Federal Police Academy at Marine Corps Air Station Miramar, where he served for five years before returning to Public Finance Law, which he practiced for 2 years until retiring.

David shared that second to marrying Carey and raising three fine, patriotic gentlemen, his next proudest achievements were supporting the Boy Scouts, including serving as Scoutmaster of Boy Scout Troop 713. He also gave generously of his time to serve as an Usher and Eucharistic minister for American Martyrs Catholic Church and Little Company of Mary Hospital. In addition, David volunteered with UCLA Medical Center’s “Operation Mend” helping wounded warriors and he sat on the Boards of Directors of several 501(c)(3) charities, including “Disabled Veteran’s Charities” and “Always a Mom Foundation.”

Befitting a Marine who served his country with distinction, David will be buried at Miramar National Cemetery.