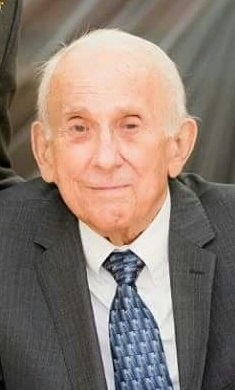 Daryl N. Hamilton passed away peacefully surrounded by his children on April 8, 2016 at the age of 84 in Palmdale, California. He was a 55 year resident of Torrance. He was born October 23, 1931 in Long Beach, California, the only child of Eric and Lucile Hamilton. He moved to Inglewood at a young age and graduated from Inglewood High School. He married Judith Richards of Inglewood in 1953 at St. George, Utah. He graduated from USC and then served 2 years in the US Army with an overseas assignment in counter-intelligence at Berlin, Germany. A lifelong educator with the Centinela Valley Unified High School District, he served as a teacher, counselor, assistant principal and principal and worked at all campus locations over a 42 year career. He retired in 1999. Daryl was a great family man and enjoyed spending time with his children and grandchildren at their many programs and sporting events all over southern California. The family spent many summer days at the beach. Summer vacations took the family to national parks around the western US. He also enjoyed his newspapers and a good novel. He was an active member of the Church of Jesus Christ of Latter-Day Saints which included positions of leadership and service. He is survived by his children Craig Hamilton (Marsha) of Palmdale, Laurel Storrs (Don) of Palmdale, Wade Hamilton (Rhonda) of Murrieta and Brett Hamilton (Jennifer) of Murrieta. He also has 14 grandchildren and 10 great-grandchildren. He was predeceased by his parents and loving wife Judy in 1999. Services will be held Saturday, April 16, 1:00 pm at the LDS Chapel, 715 Knob Hill Ave., Redondo Beach, CA 90277. Interment to follow at Green Hills Memorial Park in Rancho Palos Verdes. In lieu of flowers, donations can be made to The National Kidney Foundation