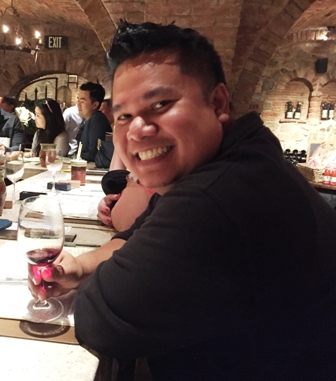 Darius Ryan Anguluan, 39 years of age and a resident of Torrance, CA, joined his Creator on March 2, 2018. He was a victim of a hit-and-run accident along Vermont Avenue in Torrance, CA. Darius or Dar, as his family and close friends fondly called him, was a creative artist and had a zealous love for music. He wrote songs and later on formed a band called Pillowcase203, where he was the lead vocalist. He loved performing with his band which recently did a front act for a well-known Filipino Comedian, Allan K, and a famous Filipino Band, Up Dharma Down. He also did painting, sketching and drawing. When he was a teenager, he was a black-belter in Karate and became a Sensei to young kids. He worked at Mirion Technologies in Irvine for 15 years, starting as a TLD Technician and then later on as an Assistant System Administrator. Darius had a great passion for living life and having fun. He loved travelling, eating out, watching shows/concerts and hanging out with family and friends. He was a joker and loved to make people laugh. He was an amazing husband, a great dad, a wonderful son, brother, nephew, cousin and a very loving grandson. He touched so many lives through his words of wisdom, deep faith in God and willingness to help at all times. He is survived by wife Jovanne, son Ryan, mother Margie, sister Kristine, brother Richard and his Lola Letty. He was preceded in death by his father Gilbert. A gathering of family and friends will be held on March 16, 2018 at Rice Mortuary, Torrance, CA from 5:00pm until 9:00pm. Mass will be celebrated in his honor at Nativity Catholic Church in Torrance on March 17, 2018 at 10:00am. In lieu of flowers, donations may be made to GoFundMe - Darius Ryan Anguluan Fund.