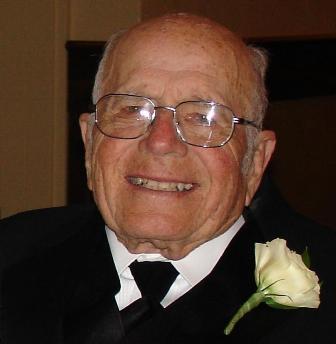 Our beloved Dario Robert Sanchez Jr. passed away on January 2, 2013 at the age of 90. He was born August 9, 1922 in Laredo, TX to Dario and Clarece, and moved to Los Angeles soon after. He had been a resident of Torrance for over 60 years and a parishioner of St. Lawrence Martyr Catholic Church. Dario is predeceased by his parents and younger brother Thomas Sanchez and is survived by his sweetie pie, his wife, Betty Ann; sister, Joyce Blackburn; sons, Warren (Patti) and Gary (Julie) Sanchez; daughter, Sharon Wagner (Karl); grandchildren, Darren, Clarice (Joe), Brett (Erica), Curtis, Vega, and Vienna. A memorial service will be held on Saturday, January 26, 2013 at 3:00pm. Rice Mortuary, 5310 Torrance Blvd., Torrance, CA. Dario graduated from University "Uni" High School in Los Angeles, then Ventura JC before enlisting for duty. Dario served in the U.S. Army Air Corp during WWII and was trained as a B-17 pilot for the war in Europe. After serving his country, Dario graduated from UCLA and started a lifelong career with McDonnell Douglas. Dario and Betty married in 1953 and were happily married for 59 years while raising an adventuresome family. Dario was an avid outdoor recreation enthusiast. Some of his passions included sailing with the King Harbor Yacht Club Lido 14 fleet, climbing mountains in Southern California with the Sierra Club Hundred Peak Section, leading BSA Troop #997 as Scoutmaster, jeeping with the Friends of the Mojave Road and Desert Explorers, and taking trips with his family to ski, hike, camp, fish, or backpack in the mountains and deserts of California.