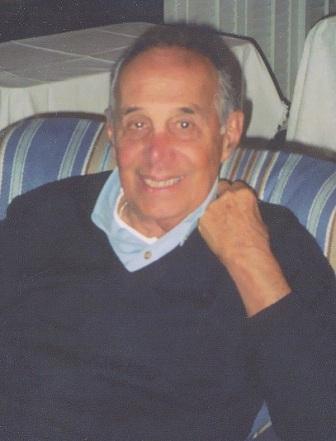 Daniel Esposito passed away Friday August 24, 2012 at his home in Manhattan Beach with his family at his side. Daniel was born in Utica, New York on April 11, 1925 and was the first child of Daniel and Sarah Esposito. He faithfully served our nation during World War II in the US Navy from 1943 - 1946. In 1948, he moved to Los Angeles and graduated from UCLA in 1952. He earned his Master's Degree in Public Health from CSU Northridge. He married Joan Grisez on April 21, 1963 in Patterson, CA and moved to Manhattan Beach the same year. Daniel worked as a health inspector for the county of Los Angeles for 37 years and retired in 1989. Daniel enjoyed watching sports, following politics, listening to the radio and taking it easy. He was known by his friends as "Spear" for his ability to sprint fast. He was survived by his wife Joan Esposito of Manhattan Beach; his sister Carmela Mahlstedt of North Hills, CA; his four children - Gena Esposito, Daniel Jr. Esposito, Patrice Tracy and Dave Esposito along with his three grandchildren Aiden, Dane and Paige Esposito; his nephew and niece Gary and Lisa Mahlstedt; and his Uncle Ralph Ruggiero of Van Nuys. Funeral services will be held at 9am on Thursday August 30 at American Martyrs Church.