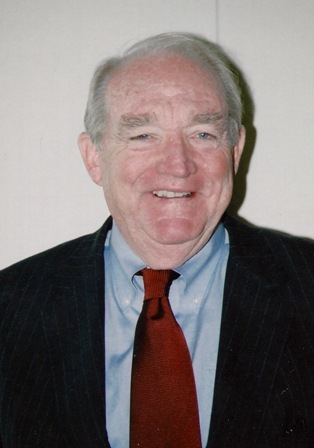 March 28, 1937 – March 8, 2017 Daniel Arthur Curry passed away March 8th peacefully at home surrounded by his loving family just shy of his 80th birthday. Born to John and Eva Curry in Tempe, Arizona, Dan grew up the youngest of seven children. As a teen, he moved with his parents to Playa Del Rey and he graduated from Loyola High School (1953); Loyola University (1957) and Loyola Law School (1960). He married Joy Shallenberger in 1959, which he believed made him the most fortunate man ever. They raised six children together in California and Hawaii. Dan is survived by Joy, his wife of more than 57 years and his children: Beth Bohn (Buddy), Katie Lindsay (Ladd), Peter Curry (Dora), Jennifer Villeneuve (Joe), Julia Marinoni (Manfredo) and David Curry; grandchildren: Jayme Bohn, Sandy Bohn, Keely Bohn, Elan Bernstein, Benjamin Bernstein, Ashley Curry, Alenna Curry Gatti (Aaron), Owen Curry, Cassidy Villeneuve, Dylan Villeneuve, Briana Marinoni, Elisa Marinoni, and Liam Curry; and a great-grandchild on the way. Dan was a Captain in the US Air Force and served in the Judge Advocate General's corps from 1961-1964. He was a litigator with Wolford, Johnson, Pike and Covel, and with Demetriou & Del Guercio from 1964-1967 and then an attorney at Technicolor, Inc from 1967-70. In 1970, he became the General Counsel and Senior Vice President for Amfac, Inc, which prompted the family move to Oahu. From 1987-1992, Dan was Vice President and General Counsel to the Times Mirror Company. He was appointed to the California Superior Court in 1992, a position he held until 1998 when elevated to the Second District Court of Appeals, Division Four until 2006. He continued his involvement on a limited basis through private judging with ARC until 2016. In addition to his professional work, Dan was a member of the Board of Regents for Loyola Marymount University (1983-98); Loyola Law School Board of Overseers (1998-2016); American Bar Association Committee on Corporate Law Departments (1973-1992), and Section of Dispute Resolution, Beverly Hills Bar Association, Litigation Section (Executive Committee 2011-2016); as a Director of the Los Angeles Oncologic Institute (1987-1992); a Trustee for the Hawaii Medical Library; a Director of the Palama Settlement in Honolulu; and as a Regent for Chaminade University (1979-1983). He was asked to be Honorary Consul General for Ireland, a privilege that delighted him though he could not accept. Dan's family, friends, and colleagues remember him for his intellectual curiosity, sense of humor, and generosity. He traveled the world with Joy, had an affinity for watches and cameras, loved books and poetry, told great stories, and was a pillar of strength to his family and community. He was a mentor, role model and staunch advocate for many, especially his children. He regaled us with stories of growing up in the wild west of Tempe where his family owned Curry Hardware and where Curry Road was named after his father. Dan was a train enthusiast, a cyclist, played college basketball, golfed, taught his children to sail, and was a great walking companion. He cherished his friendships over many years through his Loyola community and at Los Angeles Country Club. He will be greatly missed. Services will be held on March 22, 2017 at 10:00 a.m. at American Martyrs Church in Manhattan Beach.