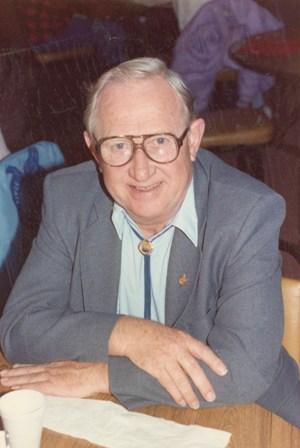 Cyril "Sarge" Sargent, a 61 year resident of Torrance, passed away on October 11, 2012. He was born in Lancashire, England and was 92 when he died. He served in the Royal Air Force during WW II but before going overseas he married his sweetheart Dorothy. In 1952, with his wife and 3 young children they emigrated to the United States traveling on the Queen Mary and overland by bus. Through hard work, determination and faith in God, he was able to purchase a new home in Torrance where their sponsors lived. He was employed by the Mobil Oil Torrance refinery for 29 years. Cyril was a member of Fraternal Order of Eagles (935) for over 50 years where Sarge & Dottie volunteered their time for non-profit causes especially those regarding Children's Foundations. He was an active member of St. Lawrence Martyr Catholic Church since its foundation in 1954 until physical weakness limited his capacity to function over the past several years. Cyril is survived by his wife of over 70 years, Dorothy along his children: two daughters: Theresa Miller of Arizona and Christine Secilia of Oregon; and one son, Pete of Torrance. He also had nine grandchildren and 13 great grandchildren. A visitation will be held at St. Lawrence Martyr Church on Monday October 22, 2012 at 9:00 am with the Mass of Christian Burial beginning at 10:00 am. Burial will follow at Green Hills Memorial Park in Rancho Palos Verdes. The reception will be held at Rice Mortuary from 12:30 pm until 2:30 pm. In lieu of flowers, donations may be made to any non-profit Organization that benefits either Children's or Alzheimer's.